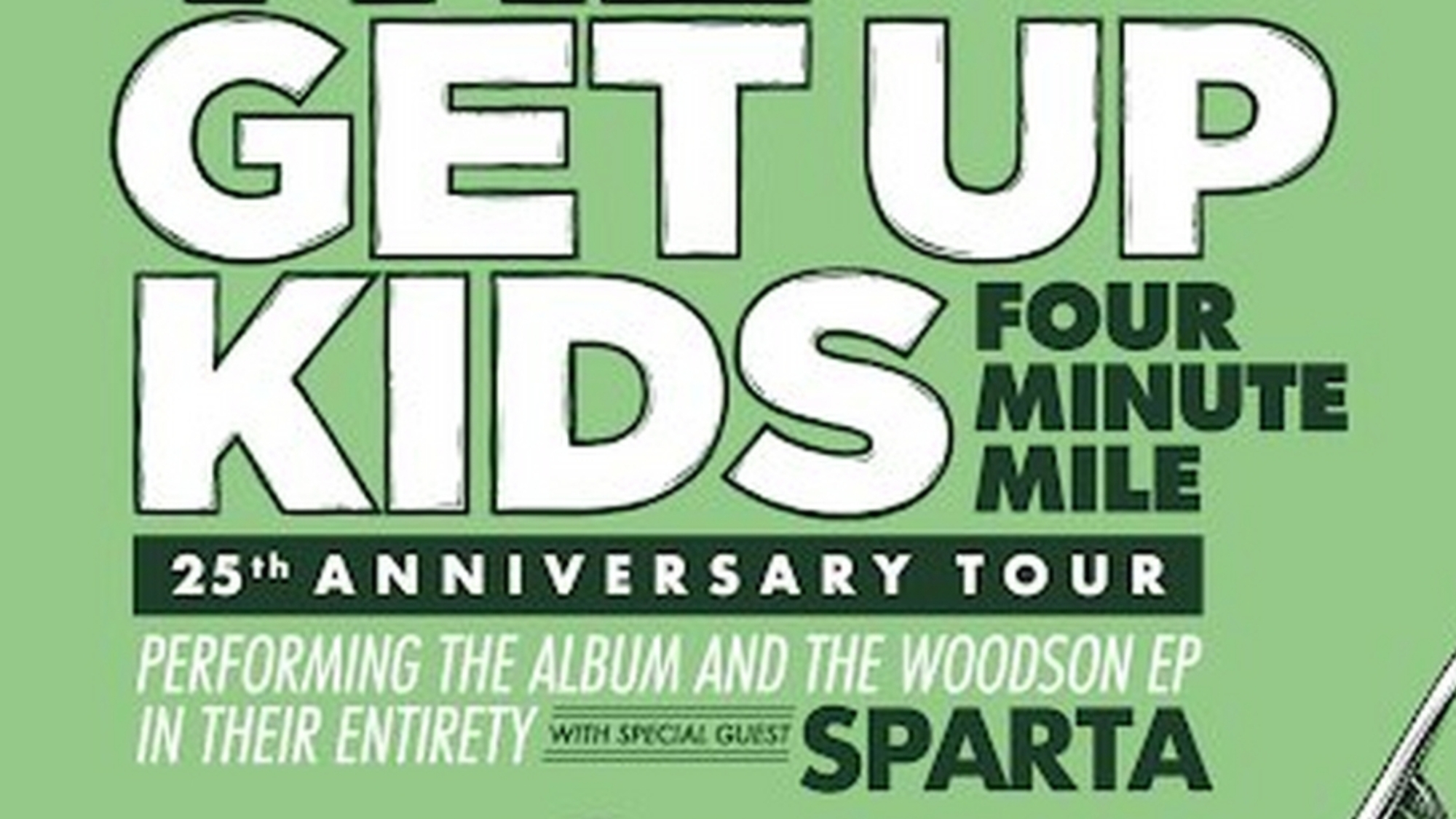 The Get Up Kids’ show at The Grog Shop in Cleveland, Ohio officially sold out sometime right after opener Sparta got off stage. Flannels and baseball caps, chuck taylor’s and van’s old schools crowded into the tiny venue, which is also celebrating a milestone of it’s own with it’s 30th Anniversary this month, to watch The Get Up Kids Celebrate 25 years of their genre-defining album “Four Minute Mile”.

One of the forebearers of emo’s second wave, The Get Up Kids are favorites of many of emo’s hugely successful third wave’s biggest bands. They influenced the sounds of MTV darling’s Fallout Boy, Blink-182, and My Chemical Romance, the latter of which they’ve shared keyboardist James Dewees with over the years.

The band came out to “Chariots Of Fire” and a “What’s Up Cleveland? As we’ve been saying for over 20 years here at The Grog Shop, we are The Get Up Kids from Kansas City”, before launching into the first track of Four Minute Mile, “Coming Clean”.

The show was an emo sing-along from the start, with the crowd helping to yelp the earnest lyrics, perhaps the loudest on the chorus of the second sogn “Don’t Hate Me”, which could be heard outside. “Oh Amy, don’t hate me for running away from you.” The crowd took over on the bridge, drowning out Matt Pryor’s vocals “Every time I run away, it’s easier to stay. At the heart, the heart is you in everything I do“.

The crowd sing-along continued into the next song “Fall Semester”, and was so intense, it caused Pryor to proclaim ” We just had an emo moment. You see that shit?” to which vocalist and guitarist Jim Suptic asked “You guys ready for another emo moment?” before launching into  “Stay Gold, Ponyboy”. The crowd was up for the task, screaming along to “I hope you don’t think less of me.”

The band continued ripping through the tracklist of Four Minute Mile at a quick clip, with rousing renditions of “Lowercase West Thomas” and “Washington Square Park” After which Suptic said, “That was Side A. Flip The Record Over, here’s side B.“

During “Last Place You Look”, some overly zealous folks in the front row danced a little too hard and spilled their beer all over a pedal board, which paused the action for around five minutes while the band dried and cleaned everything. “Welp….yep…” they bantered. “That’s what we say in the midwest when we want you to leave our house. Welp…”

The next song was the excellent ballad “Better Half”, one of my favorites, unfortunately, with the pause in action followed by the ballad, the crowd was a little out of it. It was a Sunday night after a BRUTAL loss by the hometown Cleveland Browns. The band commented on the waning enthusiasm “We get it, the Brown’s lost.” They went to the game but asked the crowd not to blame them for the outcome.

The band won the crowd right back over with “No Love”, with crowd surfing starting over the chorus of “I Don’t Won’t You To Love Me Anymore”.  They then wrapped up Four Minute Mile with “Shorty” and “Michelle With One L”. They ended the album set with a less than grand “And that’s Four Minute Mile, not bad for some 17-year-olds huh?”

I thought there would be an intermission before the band played more songs, like some of the other album reunion shows I’ve seen, but they kept right on rolling, now ripping through their 1997 EP, Woodson, playing “Woodson”, “Second Place”, “Off The Wagon” and the gorgeous “A Newfound Interest In Massachusets”.

At this point, the band left for about 60 seconds, before Pryor came back alone to perform a solo version of “Out Of Reach” off of The Get Up Kid’s seminal 1999 album Something To Write Home About, but not before pointing out a young kid in the front row and giving him a round of applause. “You’re a fucking baller dude. Take no shit.” He then gave The Grog Shop their proverbial roses. “We love it here. We love The Grog Shop. We’ve been playing here for over 20 years and they’re about to celebrate their 30th anniversary, and that’s pretty fucking cool, especially for an independent venue in this day and age.“

The band rejoined Pryor on the stage for a new song, 2019’s “Fairweather Friends” before being joined by Jim Ward of Sparta/At The Drive-In for “Wish You Were Here” off of 2002’s On A Wire. They closed the night off with fan favorite “Action & Action”

Overall, this was a show full of nostalgia and good times. The crowd left with sore throats and full hearts, and I left with a limited edition tour copy of Four Minute Mile on green vinyl, which is all you could ask for on a Sunday night in Cleveland.