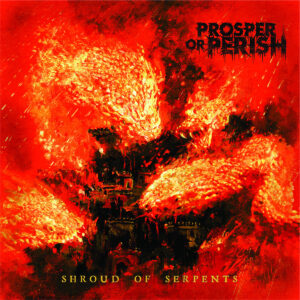 Philadelphia, PA metal quintet Prosper or Perish return with its first album in 7 years. Shroud of Serpents is a dose of deathcore mixed with melodicism and progressive elements. Opening salvo “Ironbound” is a mid-paced plodder with ferocious double bass drums and Swedish death metal inspired guitar riffing. The track sets the album’s tone and it balances brutal death metal with a progressive flair.

“Wolves and Snakes” is the album’s initial single and rightly so. It’s opening bombastic guitar is gold alone before the track speeds up with blast beats and stellar guitar work from Eric Benites and Austin Perez. “Parallel Reveries” is the first of two instrumentals on Shroud. The serene, yet haunting guitar work provides the listener an unsettling break before the next track “Fit For Vultures.” “Vultures” again shows the band’s Swedish metal influence with its sweeping guitar riffs and baroque composition. However, the subtle hardcore roots of Prosper are present when the track slows down. “Nothing Above Nothing Below” recalls Slaughter of the Soul era At The Gates with its manic, yet compressed speed and virtuoso guitar riffing. It is not generic in the slightest and one of the best songs on Shroud.

“Solace and Surrender” is the album’s second instrumental. The beautiful acoustic work is a welcome contrast to the heavy tracks on Shroud. Album closer “Gone to Waste” is the album’s longest track at just under 6 minutes. The epic track has a triumphant aura to it as the band’s musicianship is on full display.

Shroud of Serpents has great production, with a heavy bottom scoop that gives its extra weight. The instruments don’t drown out each other and the vocals are well mixed. Prosper or Perish show its affinity or Swedish death metal, without copying bands like In Flames or At The Gates to the note. The band’s hardcore influences are equally apparent which makes for a good listen. Shroud’s 10 tracks are diverse and there is rarely a dull moment.

One should not ignore Shroud of Serpents as another American deathcore release. Prosper or Perish successfully blend the speed or melodic death metal with just enough hardcore breakdowns to make this a top record. The band has outdone itself and the quintet lives up to its name. A headbanger will prosper hearing this record.

https://www.facebook.com/prosperorperish check out the band’s Facebook page for news and tour dates.