by Barry Adkins
with no comment
Better B#Music News

2019 marks two important events for the Washington D.C. band, A Sound of Thunder: they celebrate their ten year anniversary as a band, and vocalist Nina Osegueda survived a near-death experience after being hit by a bus! We’re thankful that Nina is doing much better, so now we can celebrate the other, happier aspect this year has brought. In honor of their 10th anniversary, the band has decided to release a very special greatest hits double album, entitled Parallel Eternity, and currently has a Kickstarter to bring it to life.

Parallel Eternity is not your run of the mill greatest hits compilation. Sure, it will feature fan favorites such as “Queen of Hell,” “Udoroth,” and the Catalonia anthem “Els Segadors (The Reapers),” but the band has something unique in store for both the Legion of Thunder and new fans alike. Partnering with composer Brad Charles of Magic Giraffe Soundworks, the foursome will see some of their best known heavy metal works take on an orchestral twist, along with the release of two new songs. One of these two novel tunes is “Explorer,” a 15-minute epic originally conceived in 2008, but not tackled until now, which according to the band takes “you on a journey from desert to ocean, from destruction to creation, and from crushing defeat to total victory!” 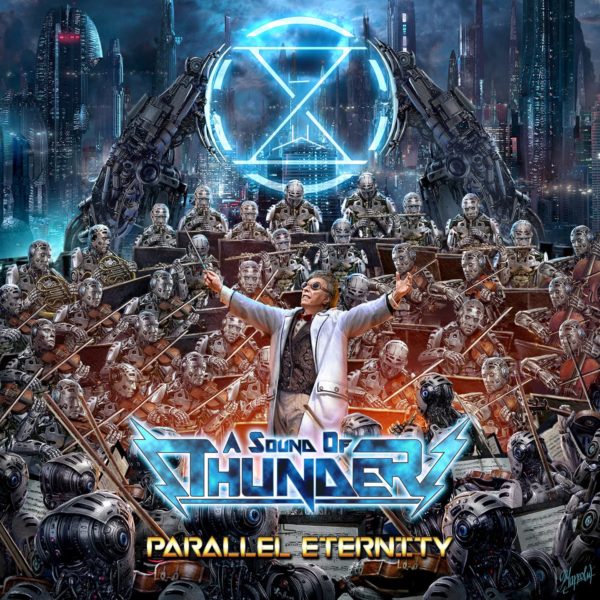 Cover by long-time A Sound of Thunder artist, Dusan Markovic.

The other new song which will be included with this release is called “Break Free (Theme From Rai),” inspired by the Valiant Entertainment comic book character and series, Rai, the sword-wielding protector of New Japan from the year 4002 A.D. Joining A Sound of Thunder in this endeavor is Dan Abnett, the writer of Rai and many other comics and novels, who contributed lyrics to the band and Charles’ musical backdrop, helping to really get inside the character and creating something more than just a fan-made tribute. It doesn’t stop there, however, because Valiant and A Sound of Thunder are celebrating the release of the new Rai series with an exclusive Rai #1 Iron Maiden homage comic book, with beautiful cover artwork by Paul Pelletier (Batgirl, Guardians of the Galaxy, etc.)

So, if you love heavy metal, or if you love comic books, A Sound of Thunder’s “Parallel Eternity” is not something you want to miss. And you have an opportunity to ensure all of this hard work comes to fruition. By contributing to the Kickstarter, which is the only place you can get copies of two different versions of the Iron Maiden homage of Rai #1 (the variant and the virgin art) as well as a poster of Pelletier’s gorgeous cover artwork, you’re not only getting some great heavy metal, but you’re helping a group of fine musicians make a second decade of great music.