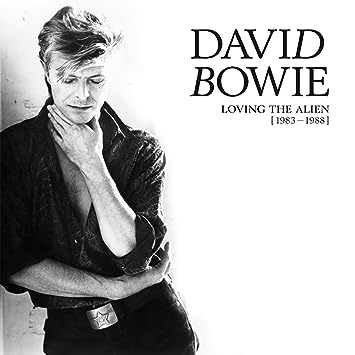 Since before his passing, David Bowie‘s back catalog has been collected, cataloged, and re-released in box set format, each one focusing on a different phase of his extensive career. The fourth installment of the series — Loving the Alien [1983-1988] — hit shelves on Friday, 12 October and offers an in-depth examination of the most commercial period of his career. Like the three volumes before it, Loving the Alien builds its foundation on newly remastered editions of the studio albums from the period it covers and rounds out the presentation with extra bits like radio edits and a few non-album tracks. Unlike its predecessors, however, Loving the Alien treads farther afield and gathers up a number of particularly notable surprises.

In the 80s, Bowie became as interested in and invested in extracurricular activities as he was in his studio albums — sometimes more so. What this means is that while there are fewer studio albums during this period than there were during his incredibly prolific 70s (the three here are Let’s Dance, Tonight and  Never Let Me Down), there’s far more in the way of outside projects to represent. These include numerous songs that he did for movie soundtracks such as Labyrinth, Absolute Beginners, The Falcon and the Snowman, and When the Wind Blows. This being the 80s, when dance mixes were all the rage, Loving the Alien includes one entire disk — entitled Dance — of nothing but extended remixes from the period. There are a couple of non-album songs as well, including Bowie’s Live Aid charity duet with Mick Jagger, “Dancing in the Streets,” and two songs that were left off of Never Let Me Down (but were released as single B-sides). There are two live albums included, one that has never been released before and one that had only been released on CD (but not LP, so that’s new for this release). Both are from shows that had been available on VHS and DVD, so they aren’t new, technically, but both are exceptionally good and it’s nice to have them in newly remastered form.

But the real story here is Never Let Me Down. And there’s a lot going on.

A hugely contentious album, most Bowie fans count it as their least favorite of his (and some outright hate it). It’s seen as his big sellout to the 80s corporate machine. Bowie himself once labeled it his “nadir.” I’ve always kind of liked it, though. I’ve said for decades that NLMD was a good album struggling to break free of a dreadful production full of heavy synthesizers, canned horns, artificial drums, and fake hand claps. If only that album could be completely re-recorded, I often thought, others would hear how good it actually is. I never actually thought seriously that such an eventuality would ever happen. But beyond all hope and reason, it now has.

Producer and composer Mario McNulty assembled a team of former Bowie associates — guitarists Reeves Gabrels and David Torn, drummer Sterling Campbell and bassist Tim Lefebvre — and stripped the songs from NLMD bare, reworking them from the ground up, leaving only Bowie’s vocal tracks (though, interestingly, McNulty makes use of many alternate takes, giving even the well-known vocals a fresh new feel to them) and a few key musical contributions from the original recording. Keyboard parts have been replaced by a string quartet, and a cringe-worthy “rap” by Mickey Rourke has been supplanted by a spoken word bit by performance artist Laurie Anderson.

In 2008 Bowie released a sort of greatest hits album called iSelect, full of tracks handpicked by him with liner notes with his thoughts on each song. Wanting to include the NLMD track “Time Will Crawl”, Bowie partnered with McNulty to create a drastically new remix of the song that vastly improved it and proved popular with fans. “Oh, to redo the rest of that album,” Bowie wrote in the liner notes. Looks like he’s now finally got his wish. McNulty secreted away in a studio with his small band of musicians and went to work. So how do the results stack up to the original?

Pretty well, actually. Kicking off with Bowie’s outrage over homelessness, “Day-In Day-Out” remains largely unchanged, retaining much of the original arrangement, backing vocals and sound effects. The guitar parts are more sparse in places, making the song sound a bit more open and less cluttered. “Time Will Crawl” mirrors the 2008 version. The two advance singles that introduced this new production — “Beat of Your Drum” and “Zeroes” — are prime examples of what this kind of approach can achieve, giving the songs a much more organic feel. The title track, “Never Let Me Down”, sounds a little bit heavier and fuller than the original, and it sounds more like a band playing in a rehearsal hall than recording a studio.

It’s the songs on the album’s Side Two that boast the most drastic changes. The album’s centerpiece, “Glass Spider”, is a completely transformed listening experience. The whole track has been expanded by a full minute-and-a-half, with the intro elongated and made more atmospheric, adding drama and weight to Bowie’s spoken word narrative. The song proper plays out over a plodding, mechanical drum beat half the tempo of the original with a wash of ambient, doom-laden guitar noise, giving the story being told an apocalyptic, post-nuclear winter setting that transforms it immeasurably. “Shining Star”, one of the most unpopular Bowie songs ever, has been transformed almost as drastically as “Glass Spider,” with it’s new, funkier half-tempo beat. There are moments where one misses the quicker, jitterier beat of the original, but this version has removed all of the schmaltz of the former and made it a darker, grittier tune. Like the Side One songs, “New York’s in Love” and “87 and Cry” remain closely faithful to the original versions, just beefing up the guitar sound and making great use of alternate vocals, giving the songs the feel of a live performance. The album closes with Bowie’s Iggy Pop cover, “Bang Bang”, and it’s an odd duck. First, it’s yet another song with a halved tempo. That’s not a bad thing in itself, but for something that’s a cover of a song from a punk pioneer, it’s an unexpected choice. Similarly, the lead instrument for most of the song is the string quartet, giving the song a quirky feel. It takes some getting used to.

There are some distinctive moments in the original that are sadly missing from the new version, like the drum fills leading into the choruses of “Beat of Your Drum” and Carmine Rojas‘ catchy standout bass lines on the title track, but for the most part this is an excellent re-envisioning of a Bowie album that’s in dire need of reevaluation. Will the new version sway any of the longtime haters? I hope so. I’d be extremely interested in encountering someone for whom this new version is their first exposure to NLMD, and then have them listen to the original version and get their reaction to it. It would be an interesting experiment.

Loving the Alien does an excellent job of chronicling Bowie’s commercial 80s period. I would love for his four-song Live Aid set to have been included, as it would be nice to have that on CD in a remastered format for the first time. But otherwise, this is Bowie’s most divisive period wrapped up in a bow.

Check out the new box set on Amazon.