Photos by Shaun Krisher. Full gallery at the bottom.

The brisk night of February 3 filled the Buckhead Theater with the amazing sounds of The Devil Makes Three and The Huntress and Holder of Hands. Leading up to the show, the parlor to the theater was filled with a calamity of different folk out on their Saturday night to fill their ears with bars full of great, seasoned sound. To quench the more traditional thirst found in Buckhead, drinks flowed as the patrons of the theater settled into their seats with some crowding the stage to get the best view in the house. Any remainders lingered near where the booze flowed to get their final cap before the show. Conversations all around could be heard reminiscing events of the long work week behind and throwing speculation on what would become of the week ahead. Overall, the scene was set for music to carry everyone’s worries away. 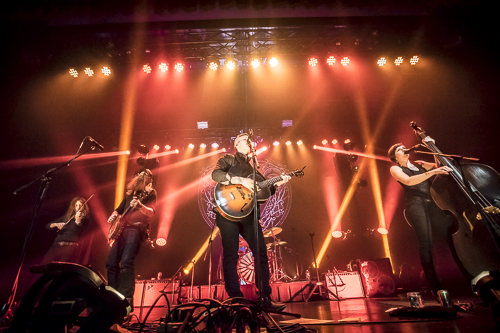 First up was The Huntress and Holder of Hands, a five-member group from Rhode Island consisting of an upright bass, cello, violin, bass guitar, and drummer with some variation including an acoustic guitar and ukulele. The group has a very mellow sound that has a very downtempo feel but also very folksy. The crowd was cold to them at first but warmed up to the group as their set progressed. The cohesiveness of the music, in my opinion, is what really drew in the crowd. While the music wasn’t very danceable or upbeat, the tightness around the set really made the music pleasant on the ears and enticing to listen to. They’re definitely not a house party band but a group worth taking a listening to.

The headliner for the evening was the solid trio The Devil Makes Three. Hailing from Santa Cruz, Cali., the band brought their take on folk to the stage at Buckhead Theater with not a single frown in the crowd. As was heard in the set by The Huntress and Holder of Hands, The Devil Makes Three played a very tight set with each member casually playing off each other to form a harmony to make angels cry. However, this time the music was super danceable. 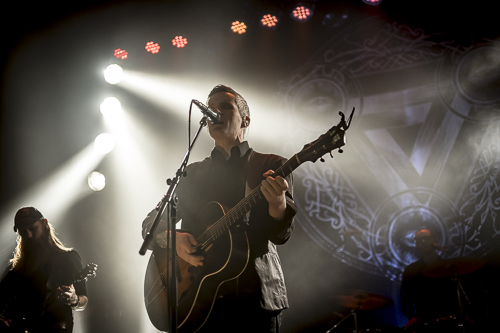 The whole of Buckhead Theater turned into a country dance hall as Pete Bernhard filled the room with his peachy vocals and succinct guitar licks. Following his charge was banjo and guitarist Cooper McBean who gave their set that extra twang that one expects from good folk. Finally, add the illustrious Lucia Turino on bass slapping away any bad mojo with her slick beat. With them was their longtime friend and fiddler Chojo Jacques who killed it with his machine-like bow movements and “Johnny beat the Devil” fiddling. As a fellow violin player, fiddler in the country sense, I respect some good licks on those small strings.

Overall, The Devil Makes Three is a band not to miss. It is rare to find a band with such perfect harmony not only in their music but in their overall performance. Even if you dislike country, I challenge you to listen to one of their songs and not catch a beat.

Check The Devil Makes Three on their 2018 tour.

Photo Gallery – The Huntress and Holder of Hands