Paranoia was high following the Paris attacks and everyone in line to see Exodus and King Diamond was submitted to a frisk and a metal detector. The line wrapped around the block and inched forward as men and women separated into individual lines and emptied their pockets.

The line looked imposing outside, but once past security, the crowd was more modest inside the Tabernacle. Monday night is not exactly prime time for concert attendance and the audience inside was scattered and patchy. The upper-most tier was closed completely. It was an older crowd, not many kids. But this isn’t Sam Smith or Hozier. These are older bands, bands that only the old heads and rabid metal fans would sacrifice a well-rested Tuesday morning at work to come see. The fans that know a show worth seeing. 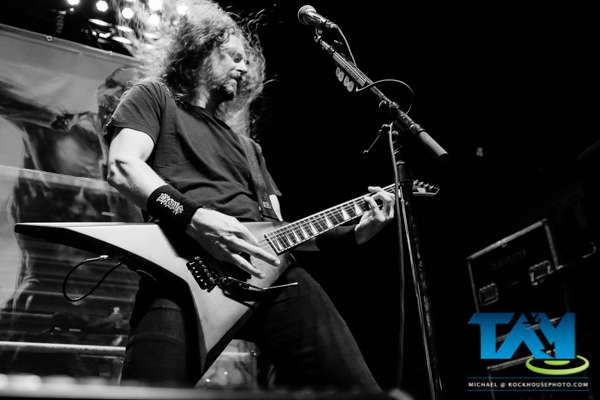 “Where are the old motherfuckers at?” yelled Exodus’ lead singer, Steve Souza. “The ones that have been with Exodus for 30 fucking years?”

By now the audience had filled in nicely and every long hair and gray beard was pumping their fist and shouting in reply. It’s an odd thing to see one of your favorite bands aging, when you notice the gray hair and paunches emerging. And it’s humbling when you start to realize that these guys are older than you and taking 10-hour bus trips city to city each night and still playing their hearts out while you moan about rolling out of your comfy bed to go to the office.

With 30 plus years of experience, there’s no doubt that the band could be on autopilot and still deliver a good show. But Exodus still attacked the stage like it was trying to incite a riot. Souza is in his 50s and is as charismatic as ever. He owns the stage. Souza was demanding of the fans, singling out anyone that didn’t have his or her hands up. A quick twirl of his fingers during “Body Harvest” and a whirlpool of a circle pit sprang to life. He head banged and played air guitar to his own songs. He still feels it. 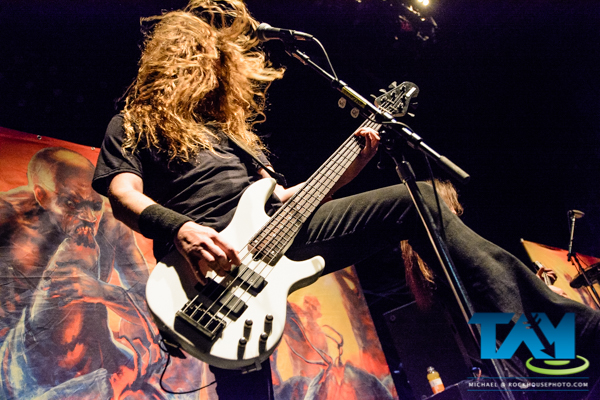 The acoustics were uncharacteristically muddy for the Tabernacle. The low end came across reedy and the vocals are all but lost in the reverb. It’s unfortunate, but the band was able to power through and keep the energy high. Exodus aimed to please with its set, digging deep with Hammett-era cuts like “Impaler” and closing out with older favorites like “Fabulous Disaster” and “Strike of the Beast” rather than forcing too many newer tracks into the mix.

“East to west, east to west. You know how to do it, Atlanta,” said Souza, calling another mosh into being for the finale. Everyone standing safely along the edges of the pit immediately threw up their phones and pointed them into the eye of the storm. It was an energetic, if short set. Exodus packed it in after just under an hour, but the audience wouldn’t have care if they went on for another hour.

It was time to assemble the King Diamond set. Scaffolding on wheels made to resemble a small-scale foyer of a mansion was uncovered and assembled. The amount of production value squeezed out of the set was impressive. Slotted sleeves were placed over the railings to invoke gothic bannisters; electric candles, Styrofoam ravens and latex gargoyles adorned every corner of the stage. Water bottles were not stowed in the corner by the drum set, instead water was poured into plastic wine glasses and set on a serving tray. It felt like Vincent Price might materialize from the smoke machine induce fog at any minute.

This is billed as the “Abigail” tour, with the eponymous album played lived in its entirety. However, “Abigail” clocks in at a mere 40 minutes, so as not to short change his fans, King Diamond front-loaded his set with about 50 minutes of greatest hits. Opening with “Welcome Home” (complete with grandma in her wheel chair), Diamond hit all of the highlights like “Halloween,” “Eye of the Witch” and even dipped into the Mercyful Fate catalogue.

King Diamond has always been as much theater as concert with his performances and once the “Abigail” portion of the show rolled around, Diamond’s cloaked henchmen rolled out a white child’s coffin from which Diamond produced an evil baby doll he proceeded to stab through the head with a big shiny knife. The band played seamlessly through the album as Diamond and a creepy consort acted out Abigail’s tale of infidelity, spousal abuse, possession, rebirth and infanticide.

Whether it was different sound guy or the sheer power of King Diamond’s falsetto, the headliner didn’t fall prey to the same audio problems the befell Exodus. But the sound issues did little to dampen the evening. Getting to see two metal legends on the same bill is a rare treat and both bands brought their A-game. For all the old school metal fans, this is a must see show.

Photo Gallery: Exodus at The Tabernacle in Atlanta 11/16/15