by Barry Adkins
with no comment
Better B#InterviewsTAM Features

B#: I normally go into a spiel about the person I’m interviewing, giving people a bit of background on with whom I’m speaking.  However, I thought I’d try something different this time.  If a stranger walked up to you and asked, “Who is Ron Thal?” how would you reply?

I’d point both my thumbs at my face and with a big smile, yell “THIS GUYYYYYYYY……”  Haha, I’m the wrong person to ask. I’m the guy that wakes up, pees, eats breakfast, and starts his day like everyone else. Others may see something else…  unless they’re watching me do all that. Well, if I’m described by what I do, I make music and try to make life a little more colorful for anyone in arm’s (or ear’s?) reach.

[Ron has released 10 solo albums, [at the time of this interview] was part of rock band Guns N’ Roses, has toured and played guitar for Lita Ford, and produces/mixes/records for countless others.] 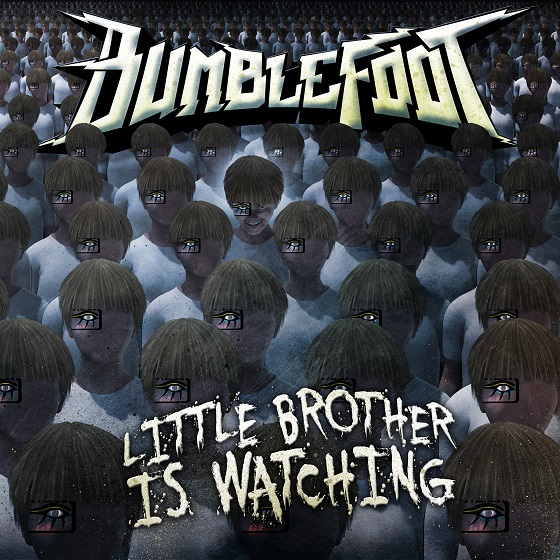 B#: Your new album, Little Brother Is Watching (check out my review here), was released at the end of February this year, your first solo release since your last digital single release in 2011, and your first full album release since Abnormal in 2008. Have you been saving the new songs up for this album, or did they all hit you at once?

There were a few songs I was keeping in the fridge for the right time, waiting for the right home for them. When the writing began with a new album in mind, everything found its place. Writing began in December 2013 thru July 2014, recording was May 2014 thru Jan 2015.

B#: You’ve released quite a few studio albums in your career.  However, as I mentioned, for around a year you were releasing digital singles on a monthly basis instead of as a full-length. With Little Brother Is Watching you returned to the full album method. Have you found that one way is better than the other?

Both have their pros & cons. With an album you’re waiting for a big pot to boil, where continuous singles keep a constant simmer going. It makes more sense to go physical (CDs, vinyl) with a full album. With singles, each song can be accepted as its own short story, where albums might be more expected to have a concept or binding thread throughout the songs. Each has its charm, and it’s great that we have choices, options as to how music is shared.

B#: The title of the album is a reference to George Orwell’s seminal work, 1984, and the title track certainly makes a powerful statement about peoples’ use of technology in today’s world. What do you think will become of the world which sees Big Brother pitted against Little Brother?

I think the two brothers will always function side-by-side. I think the bigger battles will be over structure vs. chaos.

B#: One of the weirder songs on the new album is entitled “Cuterebra.” The music is haunting and the lyrics do their best not to put the listener at ease. Can you tell us a bit about the inspiration for this tune?

The song compares the life cycle of a parasitic fly to that of gossip, how the seed is planted under the skin, feeds and grows its wings. I wrote the song on tour a year ago wandering the stairways of a hotel in Buenos Aires, it’s some of my favorite lyrics…

B#: You’ve been endorsed by Vigier Guitars for a long time and have used a wide variety of their models. Simply watching the ‘Making Of’ videos for the new album, one can see that you don’t stick to just one. Are there certain tones that you’re trying to achieve that make you reach for a particular guitar?

When I want something more organic I go for the Vigier ‘G.V.’ guitar, the Vigier ‘Bfoot’ signature guitar is great for hi-energy soloing, the ‘Flying Foot’ guitar gets nice resonation due to the chambers for the wings. And of course there’s the ‘DoubleBfoot’ fretted/fretless, my favorite..  🙂

B#: We decided to take some questions from the fans. GuitaristicNY, from your BumbleForum, would like to know about your favorite movie score. Also, if you could rescore any film, which would it be and what would it sound like?

Close Encounters Of the Third Kind. Re-scoring a film, never thought about that, hmmm… I can’t say, too many possibilities…

B#: Mirta Rosangela tweets, “Why do you have a beard when you’re already so handsome?”

You’re gonna get such a hug, you!

B#: I have a friend with a beard that would be worthy of a nod from Billy Gibbons, and have noticed that people have strong reactions to facial hair. Have you noticed a difference in how people have treated you as you’ve gone through the phases of beard growth and style change?

It’s not the length of the beard, it’s the grooming. If you’re ungroomed, people are rude.

B#: Devin Heemstra asks: What were some of your favorite practice routines/licks as a young guitarist that you used to improve certain skills?

Playing sloooowly to a 40bpm metronome click, trying to lag behind each beat. Nothing tougher than that for a hyper young shreddy kid…  builds discipline.

B#: Speaking of practicing, you’ve contributed quite a few lessons to JamPlay.com, teaching people how to improve their skills at guitar. How did you get involved over there and are there plans for you to give any more lessons?

I did about 20 lessons, and 4 ‘song breakdowns’ where I show how to play the songs ‘Vomit’, ‘Guitars Suck’, ‘Guitars Still Suck’ and ‘Spaghett.i’ It’s a fantastic site. I’d do more if I can come up with more things to teach! Haha…

B#: You’re a lover of spicy foods, and have even come out with your own line of hot sauces in conjunction with CaJohns in Columbus, Ohio. My wife, Kristen, is a huge fan of hot sauces and spicy foods as well. She’s wondering, do you have any plans on releasing a new hot sauce flavor?

I have lots of ideas for new flavors, just gotta convince CaJohns to let me back into their kitchens!

B#: Speaking of hot foods: what’s the hottest thing you’ve eaten as of this point and what was your reaction to it?

A pepper known as the ‘Carolina Reaper’. Created by Ed Currie, it’s the hottest pepper on Earth, holds the world record. He’d give me bags of them and I’d bite off little slivers of them until I was all spaced out…

B#: Vegard, from the Bumbleforum, asks do you have a role model when it comes to honesty in music?

B#: Your biography tells of your early days of music, your desire to play bass guitar and how the music store told you the law required you to play guitar for two years before moving onto bass. While you do play all the bass tracks on your new album, do you feel like they did you a favor or vastly undermined your bass player potential?

I’d have to hop onto another plane of reality and check out the alternate outcome. I think it worked out the way it was meant to.

B#: What was the most enjoyable part of the new release’s recording?

I enjoyed doing the backing vocal harmonies. And doing the ‘Making Of’ videos and sharing the process…

B#: You’ve made it a habit of using your skills for good causes. You’ve played a Navy Seals Benefit concert, “Rock Against Diabetes” for diabetes research and a children’s hospital, not to mention quite a few others. How do you usually find yourself involved in these events?

Just from meeting people and talking with them. It’s always personal. When I travel I try to include these things whenever possible, visiting Autism schools, and fundraising to help children.

B#: You’ve created a band with twin brothers Jon and Vince Votta and bassist John Moyer (of Disturbed). It even features vocalist Scott Weiland (of Stone Temple Pilots/Velvet Revolver)! How would you describe this release and when can we get our ears on it?

To me it sounds like grungy metal, with a lot of stellar vocal melodies. Should have an announcement about the release date very soon  🙂

B#: You’ve been helping out Darryl McDaniels (DMC from Run DMC) and Generation Kill (feat. members formerly of Exodus, Pro-Pain, and more) in a collaboration they’ve been doing. A song entitled “Lot Lizard” was just released, described by yourself a one “nasty, nasty song.” How has that project been going and can you give us any more information on it?

We’re having a blast with it! Just finished another song, a real sports anthem. Everything is sounding great. Love making music with these guys!

B#: You’ve just released a new solo album, are about to see the Art Of Anarchy album drop, and are contributing to a rap metal collaboration. Is there anything we’ve missed, or simply haven’t been told about yet?

Corfu Rock School.  Spend a week with me on the beautiful Greek island of Corfu, we spend the first half of the day working on guitar studies, spend the afternoon at the beach and sightseeing, a chef making lunch and dinner, in the evening we work on songs and then hit local pubs and play gigs, jam all night…  It’s August 1 – 8, more info at www.CorfuRockSchool.com 🙂 There’s also a contest run by the German music company ‘session’ where First Prize has tuition accommodations and airfare from Europe paid, all who enter the contest get 10% off tuition. Here’s detailed info from my newsletter…

B#: Assuming your schedule was miraculously open, how would you fill the time?

Making music. I love what I do, there’s nothing else I’d rather be doing  🙂

B#: Thank you, Ron, for being so gracious with your time. Is there anything you’d like to tell everyone before you get back to your busy world? Don’t forget to floss? A recommended showering schedule? The proper way to wire an out-of-phaze guitar pickup?

Thank you all for *your* time, everyone! Appreciate you checking this out, thanks! Hope to see you all soon!