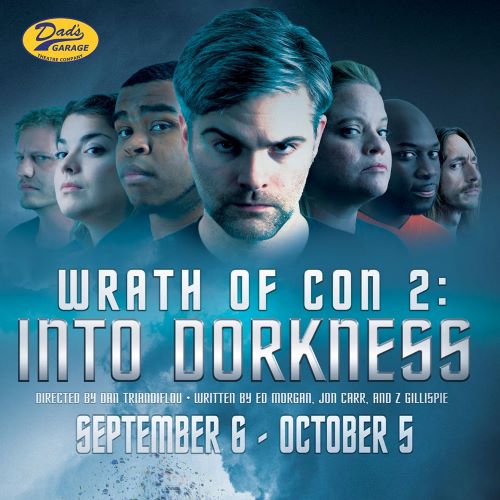 Wrath of Con 2: Into the Dorkness Opens at Dad’s Garage

After the success of the Wrath of Con revival this summer, the gang returns to the convention scene with a sequel in 2019.

A few years back Atlanta was named the “nerdiest city in the country” by the real estate blog Movato. The blog credited Dragon Con for being a driving factor in that distinction. Dragon Con is over for 2019, but the spirit of Dragon Con will be both celebrated and lampooned in the upcoming play Wrath of Con 2: Into Dorkness, opening this Friday, September 6, 2019, at Dad’s Garage Theater Company.

Written by Dad’s Garage mainstays Jon Carr, Ed Morgan, and Z. Gillespie, Wrath of Con II is a sequel to the popular geek-homage play Wrath of Con. Wrath of Con was first produced in 2012, and has been performed in various ways since then, and came back to fully packed performances this summer. The first play featured the interwoven tales of six disparate convention goers at a generic convention that bears a strong resemblance to Dragon Con. It was hilarious, moving, and a well-crafted night at the theater.

What can we expect from the Wrath of the Con II? We can expect complicated and honest human experiences with laughs and heartaches against the backdrop of a modern convention scene in a world of Marvel Cinematic Universe, the celebration of diversity in fandom, and a look at how being a nerd has changed in 7 years, while being a human continues on.

Go to Wrath of Con 2: Into Dorkness to conquer your post-con depression.