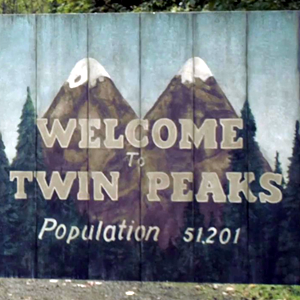 Welcome (Back) to Twin Peaks

In a small town in upstate Washington, the body of the high school homecoming queen is discovered. An FBI agent is sent in to investigate. What he finds, though, is significantly more than just a small-town murder, and he uncovers a surreal, twisted, and downright bizarre web of secrets, doppelgangers, mystic visions, and a damn fine cup of coffee. Welcome to Twin Peaks, the fictitious small town in upstate Washington located “five miles south of the Canadian border and twelve miles west of the state line” which was the subject of the ABC series of the same name in 1990-1991, created by Mark Frost and David Lynch.

On May 21, 2017, “Twin Peaks” made its long-awaited return to television screens—25 years after the series ended with the prequel film “Fire Walk With Me” in 1992—this time on cable giant Showtime. It was a bit of a rocky road getting there, though, with Lynch in and out of the project due to budgetary disagreements with Showtime. Eventually, though, all troubles were ironed out and the series’ original nine-episode order was doubled to eighteen, with Lynch as sole director.

My knowledge of “Twin Peaks” is peripheral at best, gained mostly through cultural osmosis. I love many of Lynch’s other works (“Mulholland Drive”, “Dune”, “Lost Highway”, “The Elephant Man” and others), but had simply never gotten around to “Twin Peaks.” So, when Showtime broadcast the first two episodes, simultaneously making the first four available on demand, I felt it was time for me to take the plunge. But first I talked to longtime fans to find out what they thought of it. I wanted to know how they came to be “Twin Peaks” fans, why they loved it, and whether the new show stacks up to the original.

Josh Wilson of Atlanta was first introduced to the films of David Lynch in high school. He tracked down “Twin Peaks” partly because of his love of Lynch films, but also because of his love of “The X-Files” (which was influenced by “Twin Peaks”). Wilson recalls being drawn into the series because “I love Lynch’s sensibilities. His imagery and use of dream logic, his wacky humor, his willingness to explore a dark mythology … all things I love.” Four episodes in, and he’s found the new show to be “such a mind-blowing experience. Pure unadulterated Lynch. It’s brilliant.”

For Rachel Stewart of Chattanooga, TN, the journey began with the discovery at a Dollar Tree of The Secret Diary of Laura Palmer, the spin-off novel written by Lynch’s daughter Jennifer. Stewart was 13 at the time, almost exactly Laura’s age in the book, and she had a love of reading diaries, both fictional and factual. “I read the book cover to cover and then headed to Blockbuster to rent episodes (once I figured out it was in fact a TV show). The only thing Blockbuster had was the pilot (with the European ending) and ‘Fire Walk with Me’. So, I went for years just on those two things.” It was the show’s setting that entranced her: “Having grown up in a small Southern town my whole life, I could relate to and appreciate the characters and the idea that something just isn’t right.” From “Twin Peaks” she explored other Lynch films and became a fan. For her, the new series is “pure Lynch aesthetic and insanity. I am charmed, bewildered, and terrified all at once.”

Echoing their sentiment is Tripp Gwynn of Charlotte, NC: “My brain is still reconfiguring itself. I lack proper terminology. But, it was really, really good.” Atlanta musician Joe Monticello told me, “One episode in, and it seems like it’s much more David Lynch than Mark Frost. This is not a bad thing at all, since I’m a huge Lynch fan. I’m definitely all in and looking forward to seeing where it all will go.”

“Twin Peaks: The Return” stars Kyle MacLachlan as three (so far) different versions of his character, Agent Dale Cooper. The show also features major appearances by original cast members Kimmy Robertson (Lucy Brennan), Russ Tamblyn (Dr. Jacoby), Ray Wise (Leland Palmer), Dana Ashbrook (Bobby Briggs), and many more. While fans welcomed the return of all their favorite characters, for Stewart, the heart of the story is Laura Palmer, played by Sheryl Lee. “Laura is an icon for the town, as well as the series. I love her because I think she’s a good person who’s struggled with darkness and demons in her life.”

There were two cast members whose involvement in the new series was gravely affected by cancer. Catherine Coulson played Margaret Lanterman, better known to “Twin Peaks” fans as the Log Lady, a grieving widow who carried a log around with her. Regarded by the townspeople as crazy, Lanterman would dispense cryptic messages of foreknowledge that she claimed would come to her from her log. Coulson appears in the first two episodes of the new series—hair loss, breathing apparatus and all—having filmed her final scenes just prior to her death in September 2015. “I was a little verklempt during Catherine Coulson’s scenes,” Gwynn commented. “They were like messages from the great beyond.” An appropriate epitaph for the Log Lady.  One other intended returnee didn’t fare quite as well. David Bowie was to have revisited his role from “Fire Walk With Me” as Agent Phillip Jefferies. No one knew how sick Bowie was at the end of his life until he passed suddenly on January 10, 2016. He was unable to participate in filming for the new series, but his character still seems to have a significant role. “It kills me that he was ill as this was being shot,” Wilson stated. “He has a big part in it that you can tell was worked around. He’s mentioned a lot.”

The overwhelming sense is that the long wait for “Twin Peaks” to return to television was worth it. “Totally,” says Wilson. “It’s pure Lynch and that’s why it’s so good. Doing it without him would have been a pale shadow of what it should be. He’s not giving you what you think you want, and that’s the brilliance of it. There’s no one else like him.” Josh Pinder of Saint Austell in the UK agrees, adding that “[It’s a] surreal feeling that we exist in a time where they’ve actually made another season.”

So the fans are happy. But what about new fans? How inviting is this show to new viewers? Would someone who is curious about it be able to jump in? “Casual viewers are gonna hate it,” Wilson said. “If you aren’t versed in what had happened before, I can’t imagine you’d be able to follow a second. Going in knowing nothing, I think you’d be totally lost.” Dan Benge of Atlanta concurs: “It’s very Lynchian, which will also be a major problem for anyone who hates nonlinear stories.” Even one original fan, Pierce Piper of Conyers, GA, found it difficult to reconnect: “I pretty much feel like I needed to see the original series again to refamiliarize myself with everything. There were characters I didn’t remember and plots I didn’t recall except vaguely and that did me no favors in watching this.”

Armed with all this feedback, I decided to dive in—and I found that my friends were right. The show offers no assistance whatsoever to new viewers; in fact, the very first scene proves to be pretty much unintelligible to the uninitiated. One is expected to grab on and hold tight, figuring things out as one goes … or not.

But I stuck with it, and I’m glad I did. Once I got past the first scene, it started to make a weird sort of sense. The first episode introduces four main plot threads: In Twin Peaks, Deputy Chief “Hawk” Hill (Michael Horse) receives a message from the Log Lady about the long-missing Agent Dale Cooper. Somewhere in New York City is a mostly-empty room containing a large, transparent glass box that’s being observed around the clock in case something appears in it. And in Buckhorn, South Dakota, Cooper’s doppelganger acquires two sidekicks but kills both as he discovers they’re plotting against him. DoppelCooper is almost certainly tied to another event in Buckhorn, the brutal murder of the town librarian, her head completely severed from her bloated body. The school principal’s fingerprints are found all over the victim’s apartment, but he has no recollection of ever being there. What’s more, the body isn’t hers—it’s a John Doe. So where is her body? And where’s John Doe’s head?

Along with all the returning characters, “Twin Peaks: The Return” introduces a large cast of new characters, most of them appearing in only one or two episodes, telling their chapters of the unfolding narrative. Among standouts are Matthew Lillard, giving one of his finest performances as Principal Hastings, who goes from happy husband expecting company for dinner to imprisoned accused murderer who has little recollection of even knowing the woman he has supposedly brutalized; and Michael Cera, making a one-off appearance as Wally Brando, son of Lucy and Deputy Andy Brennan, born on Marlon Brando’s birthday and modeling himself after “Easy Rider.”

It’s rather difficult to describe the show’s plot in any meaningful way, simply because it’s made up of seemingly unrelated story threads that range from the incredibly mundane to the abstract and metaphysical. For instance, Episode Three makes the Herculeanleap from an extremely strange, silent, nightmarish scene of Cooper in outer space with an eyeless Japanese woman, to a quaint and amusing scene in the Twin Peaks Sherriff’s office and a discussion of the relevance of a missing chocolate bunny (spoiler alert: It’s not very relevant). Lynch is a master at balancing the dark and disturbing with doses of offbeat humor.

Much of the dialogue throughout is quite stilted and the delivery of it by the actors is deliberately mannered, giving the whole production a dreamlike, even otherworldly, quality. All that drops away, however, at the end of Episode Four: FBI Agent Albert Rosenfield (Miguel Ferrer) and Deputy Director Gordon Cole (David Lynch) have a private conversation about their meeting with who they thought to be Agent Cooper (surprise—it’s DoppelCooper). The two men express their disquiet about the encounter and conclude that something is very wrong. The scene is played straight and with deadly seriousness, separating it stylistically from the abstract and overly theatrical delivery of almost every other scene in the production, lending it a grave urgency and importance that it wouldn’t have had otherwise.

Lynch’s directorial style creates a visual landscape unlike anything else currently on television. He employs lengthy static, silent shots to set the mood of his piece, including having a single character walk away from the camera and conduct his business in the background of the shot. The lack of camera movement and edits (plus the almost total absence of incidental music) means that the show feels much less like a television production; in fact, it gives the viewer the sense of being in a room in which the action happens, as a spy or a voyeur if not a participant.

I’m very glad that I gave this show a try, and I’m now looking forward to exploring the earlier episodes. It’s definitely a challenge, but having the internet and good friends well versed in the lore at hand can carry you a long way. “Twin Peaks: The Return” is not for the faint of heart. But if one has patience, and has an open mind, and isn’t put off by bizarre, non-linear storytelling, the experience offers rich rewards.