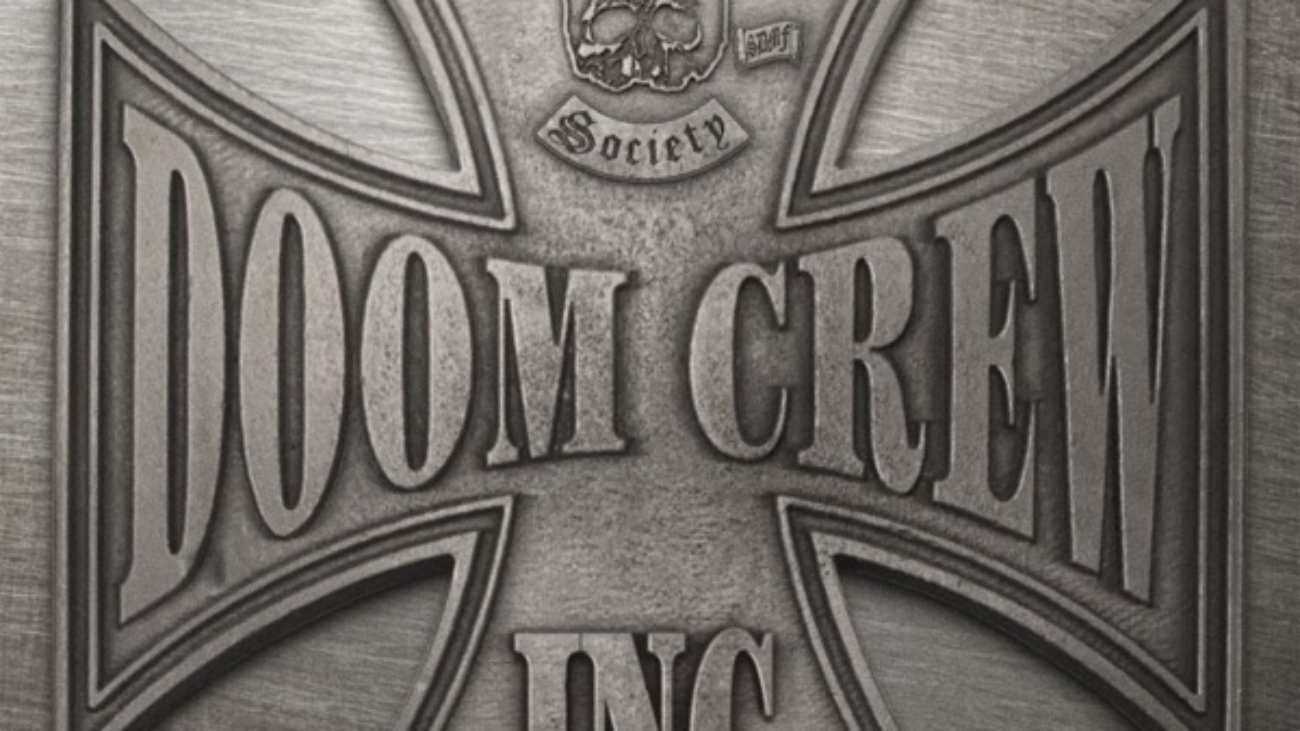 Black Label Society is back with album 11, aptly titled Doom Crew Inc. “Set You Free” opens the album with a sorrowful acoustic guitar that abruptly ends with Zakk Wylde’s signature chugging guitar riffs. “Set You Free” is one of the more radio friendly tracks on this record, but still packs a punch. “Destroy & Conquer” is a hellish blues metal track one could easily hear in a biker bar. The opening riff is a bit generic, but the slowed down doom riff during the song’s midsection and twin guitar leads save the song. “Forever And A Day” is an introspective ballad that shows Zakk’s soft side and is one of my favorite tracks on Doom Crew Inc. The chorus is beautifully haunting and the guitar solo heightens the feeling of loss. “End of Days” is eerily reminiscent of Alice In Chains, but is certainly not an imitation. The heavy, somber guitar riff hovers over the song like a dark cloud. Still, the dual guitars of Wylde and Dario Lorina are the track’s centerpiece as they transition from soft phrasing to sweeping arpeggios. The spirit of Black Sabbath overlooks the plodding “Gospel Of Lies.” The volcanic, foreboding opening riff sounds like something Tony Iommi wrote. The heavy blues jam during the bridge again showcases Wylde and Lorina fusing blues with shred to great effect. “Farewell Ballad” is a fitting closing. The downcast lyrics and weepy guitar evoke the reluctance of saying goodbye to a loved one. However, there is a feeling of acceptance as we realize that we have reached the end.

Doom Crew Inc. has great production. Zakk produced this album at his home studio, the Black Vatican. Each instrument is audible and the vocals sound fine. The guitars are the focal point of any Black Label Society album and they are loud and clear on this album. There is little to critique production wise.

Ultimately, BLS fans will enjoy Doom Crew Inc. The album is diverse offering cohesive blend of doom laden metal, sad ballads and blues tinged hard rock. Perhaps the one sticking point is the album’s 63 minute length. However, that is eclipsed by the band’s musicianship and the monolithic riffs of Wydle and Lorina. Doom Crew Inc. is a dedication to the band’s road crew and fans, and the band pull out all the stops on this one.

Hello once again, ladies and gentlemen.  It’s time for another installment of Better B Brief!  This is where I briefly point out some albums that I adore.  All of these deserve to have a full, thorough write-up, but I have so many to tell you about that I just don’t have enough day to do it in.  So, without further ado, here are our three worthy artists!

It’s been a long time coming for this album review.  I was never really a huge Toto fan.  I knew the hits, but I had never owned a full-length album of theirs prior to this.  But sometime in the middle of 2015, I came upon this record and was completely blown away.  Toto’s XIV is a “don’t hit skip” LP.  Each song is unique and beautifully crafted.  It’s not just about big choruses and wild guitar solos, though they’re here, but rather about the details tucked away in each nook and cranny.  Each time I listen, I find myself hanging on each sung note; I’m captivated.  This becomes all the more amazing when you consider that each member of the group (sans drummer Keith Carlock) carries lead vocalist duties on at least one song.  And unlike some albums, the tracks here are so distinguished in sound and design that they are immediately recognizable.  Yet, despite the diversity, somehow the whole thing comes together magnificently.  From the avarice-tinged “Running Out Of Time” to the hopeful “Great Expectations,” there are no losers here.  Toto’s XIV was my vote for Best Album of 2015.  I suggest you revisit it.

My relationship with Zakk Wylde and his music has been an on-again, off-again affair.  I loved his band Pride & Glory, but only occasionally dabbled with Black Label Society (though Order Of The Black was a phenomenal release).  However, his 1996 solo album entitled Book Of Shadows was an instant hit to my ears.  Its mostly acoustic, intimate nature, fueled by gut-wrenched emotions laid bare, struck a chord in this poor soul.  Twenty years later, Wylde decided to open that book once more, writing another series of chapters that speak to the struggles of his life.  And once more his words and music have resonated within me.  I was surprised to hear from some people that the new songs were lacking, or ripped off other classic rock songs.  While I certainly hear the melodic similarity between the opener “Autumn Changes” and Pearl Jam’s “Black,” I don’t believe that Wylde took it intentionally, and the similarities disappear in other aspects of the song.  Book Of Shadows II is more than just a collection of ideas and licks plucked into a recorder, or some lines scribbled on road-side diner napkins; it is a journey towards absolution.  Others may do as they like, dismissing this release, but I will gladly take it in and find comfort in its company.

My eyes and ears have been eagerly awaiting the release of Apollo Under Fire’s self-titled, debut album ever since vocalist Donald Carpenter (Eye Empire, Submersed) announced the band’s inception in 2014.  Despite feeling frustrated at the sudden split of Carpenter from Eye Empire (now seemingly only a hiatus), I knew that his involvement with guitarist Peter Klett (Candlebox) could only lead to good things.  When my autographed, pre-order copy arrived, I was not disappointed.  Each of these songs, co-written by Carpenter and Klett, is bursting from the seams with an unending well of positivity and hope, stitched together by warm guitar chords and an emotional vocal performance.  For those looking to find a heavy-handed replacement for Eye Empire, you won’t find it here.  What you will find is an amazingly solid release from start to finish; a friendly word that will pick you up when you’re feeling down and out.  This hard rock record is as fine a beginning as any group could wish.  If you don’t have it, you’re missing out.

**Also Metal Mark McPheeters interview with Jimmy Bower of Down

BIRMINGHAM–The Revolver Golden Gods Tour boasts an impressively heavy bill with enough variety to intrigue most metal fans. And the sold out show certainly attracted a broad spectrum of fans to Iron City on May 2nd. Kids in makeup and dyed hair stood alongside grizzled, leather-clad bikers in a line that wrapped around the block.

The doors opened at 7:30 pm, and by 7:50 pm, as people were still funneling into the venue, Butcher Babies had already played and left the stage. The quick show was a disappointment for those interested in enjoying what is normally a visceral performance. While the band’s thrashy nu-metal (or “neo thrash”) tendencies aren’t particularly appealing, the band’s energy on stage is irresistible. Butcher Babies exploits a simple but effective gimmick, having its two attractive, half-naked and gore-covered vocalists jump around the stage and scream their heads off. Heidi Shepherd and Carla Harvey are magnetic personalities in spite of the trashy concept, and their dynamic vocals are the bedrock of the band. The duo dominated the little space allotted them on stage amid the covered Black Label gear, but most concertgoers had only just glimpsed them before the band departed the stage.

The setup time for Devil You Know took longer than Butcher Babies entire set. The newly formed super group, comprised of members from Killswitch Engage, Fear Factory and All Shall Perish, is probably the least known member on the bill. But the band’s pedigree is certainly enough of a draw. Sadly, Devil You Know’s brand of metalcore sounded as dated and derivative as the Butcher Babies neo thrash, but the band lacked the spectacle or the enthusiasm on stage to make the lackluster performance forgivable. Howard Jones did little more to stir the ambivalent crowd than walk in circles and clap his hand in the air a couple of times. The performance got progressively worse with off key harmonies and dull riffs, but was mercifully brief.

Phil Anselmo, front man of Down, preaches to the crowd opening night in Birmigham May 2. Photo by Shawn Evans for SkullsNBones.com. Used with permission

Down came next and, ever the consummate front man, Phil Anselmo, expertly broke the lull left by Devil You Know. Anselmo’s rapport with his fans is something to be envied; in just a matter of moments he had the crowd at his command. When he trotted out favorites like “Witchtripper” and “Bury Me in Smoke,” Iron City erupted. The lethargic audience was suddenly a whirlwind of fights, moshes, crowd surfers and weed smoke, as if Anselmo’s mere presence was enough to incite a riot. Security guards were taxed during the performance, constantly lunging in and out of the crowd to quell violence and cart off stage hoppers.

Where Down invoked frenzy, Black Label Society invoked awe. Zakk Wylde’s appearance caused the audience to fall silent and push as tightly as possible along the foot of the stage. Reminiscent of Iron Maiden’s live show, the band broke out smoke machines and colored lights forming pentagrams around Wylde, while the band played as long and has hard as they wanted on any given song. Wylde would jam on a song an extra four or five minutes, but at the first sign of fatigue from his fans he would deftly change gears and pull the audience back in. It was apparent the other bands on the bill were rushed off, Down was only allotted 40 minutes, so Black Label Society could stretch out and deliver a headliner worthy performance.

Despite its inadequate beginning, The Golden Gods Tour delivered on the back end. The twin powerhouses of Down and Black Label Society wiped away any disappointment from the opening acts and sent fans home well-sated on it’s metal smorgasbord. For anyone that likes heavy music served slow and sleazy, this is a tour you should not miss.