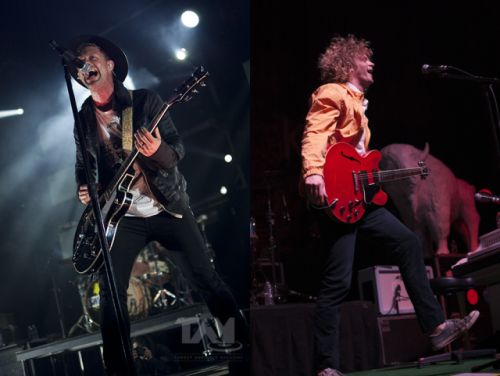 Switchfoot & Relient K look for America at The Tabernacle Oct. 30

Switchfoot’s Looking For America Tour rolled through Atlanta October 30, with co-headliner Relient K. Fans of both bands packed the Tabernacle early to get a good spot to enjoy the show featuring the veteran Christian rock bands.

Relient K took the stage amidst a backdrop of a two-story house, a BBQ grill, coolers and a gigantic bison to the tune of Michael Jackson’s “Thriller,” getting the crowd in the Halloween spirit. The band out of Ohio has been together now for an impressive sixteen years, releasing its eighth studio album Air For Free in July. Lead single from the new album, “Bummin’,” started off the night with front man Matt Theissen all smiles as the audience sang the words back to him. Though the band has gone through several line up changes over the years (Theissen and guitarist Matt Hoops are the only remaining original members), Relient K’s sound has remained the same fun, upbeat punk/rock as its always been since the release of 2000’s self-titled album. Old school Relient K got some love early in the set with “Who I Am Hates Who I’ve Been,” but Air For Free dominated with “Runnin’,” the fun sing-along “Mrs. Hippopotamuses’,” and “Mountaintop.” Relient’s set also included a couple of Halloween songs, “Halloween in Owatonna,” and “Halloween Blues,” before ending the night with fan favorites “Be My Escape” and “Sadie Hawkins Dance.”

Switchfoot hit the stage next amid soft blue lights with guitarist/singer Tim Foreman launching into “Holy Water,” the first track on the band’s new album Where The Light Shines Through, before being joined by his brother/lead singer Jon Foreman. Where The Light Shines Through is Switchfoot’s tenth studio album, but the band only continues to get better with time. If there is one word to describe seeing Switchfoot perform, it would be uplifting. Foreman is the type of songwriter that is not afraid to be real and raw in his lyrics and it pays off with the earnest and hopeful message of this new album. That message resonated and was plain to see in the faces of the fans as they sang along with him as “Meant To Live,” the band’s breakthrough single from 2003’s The Beautiful Letdown, filled the speakers. Foreman left the stage (for the first time of many) to sing personally to several lucky fans during the performance, even crowd surfing several times and holding the hands of people in the crowd. Switchfoot is able to connect with fans in a way that is rare, but comforting and encouraging, as if they were old friends and confidants to everyone in the audience. “Stars” took fans back to 2005’s Nothing Is Sound, before new songs “Where The Light Shines Through,” and the gorgeous “I Won’t Let You Go,” kept the set going. The highlight of the night was an intimate, acoustic version of “Hello Hurricane,” during which all the members of the band gathered around a single microphone, encouraging the audience to light up The Tabernacle with their phones and sing along. “If The House Burns Down Tonight,” “The Sound,” and “Where I Belong” ended the set, but the crowd demanded an encore that came almost immediately with “Float,” “Live It Well,” and the band’s most beloved song “Dare You To Move.”