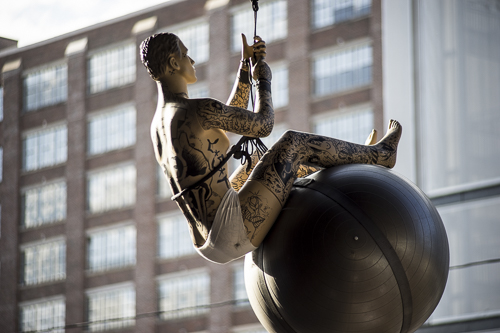 Saying Goodbye with The Wrecking Ball

The second annual Wrecking Ball was a memorial service honoring the passing of the Masquerade. Not one of those dour Presbyterian services, but a raucous New Orleans-style affairs. Grim reapers and punk effigies duct taped to wrecking balls adorned the sidewalks and venue. The courtyard was lined with vendors offering t-shirts, corn dogs and “Free Shit Haircuts.” Long dead bands resurrected to eulogize the memories of the dearly departing venue.

This year’s lineup was packed with more than 60 bands, including several presumably last chance reunion and farewell shows. Even with bands in such close proximity, it was possible to migrate from stage to stage every 15 minutes and still not be able to see every performance. If at any point there was a gap between bands on your “must-see” headliner list, you could always be rewarded by poking your head in the Hell or Purgatory stage. Someone somewhere was always playing and they were always worth a few minutes of your attention.

Many bands traced their history across the entire festival. Taking the stage after Rainer Maria, The Promise Ring’s Davey von Bohlen recalled that the band had opened for The Promise Ring’s first show. “Perhaps we’ll have to get Samuel or Texas is the Reason if we do this again,” said von Bohlen. Later that evening von Bohlen played again with his current band, Maritime. Hardcore band Give Up the Ghost performed under its original name, American Nightmare, and band member Wesley Eisold trotted out his solo act Cold Cave. Anthony Civarelli brought both of his occasionally reunited punk acts, Gorilla Biscuits and CIV, to Wrecking Ball and his band mate in both bands, Walter Schreifels, played a headliner slot with his other, other, other band Quicksand.

The Wrecking Ball boasted less a lineup than a community. The bands were like old high school friends brought together for a wake, paying respects and making small talk in the hallway. Bands that hadn’t played in 15 years were back and playing with the same groups they were playing with before they disbanded. These bands were fans of each other and they were as excited to watch the other sets as the rest of the audience. Drug Church expressed excitement about seeing Piebald and jokingly asked the crowd if they should play “When Life Gives You Lemons and Venetian Blinds” or “You’re Part of it” before launching into a cover of “American Hearts.” Motion City Soundtrack lead singer Justin Pierre sat just off stage to watch The Promise Ring and after his own band’s farewell performance said, “I haven’t seen Dinosaur Jr. in 25 years. I can’t wait to see them again.”

The festival was overflowing with attendees. Event security sat at the entrances of Heaven and Hell carefully monitoring and regulating the number of people at each stage. Some of the bigger names like Hey Mercedes and Piebald that didn’t make it to the outdoor stages drew lines that wrapped around the block. With the smaller indoor stages supporting capacity crowds and hardcore acts like Trapped Under Ice and Gorilla Biscuits rousing fans to attack the stage, the Masquerade was definitely showing its age. The floor in Heaven felt rickety and rumbled under the stress of punks plummeting from the stage to the floor in acrobatic bounds. Pushing past crowds on the narrow, shaky stairwell, it became apparent that it was time to say goodbye to the venue.

Quicksand was the perfect closing act for the event. The band’s low-end punch sent vibrations through everyone near the stage, shaking their innards. The set could be heard for miles and people in the condos the next block over sat on their balconies to listen. It was enough to revitalize the sun burnt and exhausted crowd and give them enough energy to make it to their Ubers waiting outside. The Masquerade will be reborn at its new location and Wrecking Ball will be there again next year. But for dedicated music fans in the area, this was still a goodbye to a landmark venue and a concert experience they will long remember.