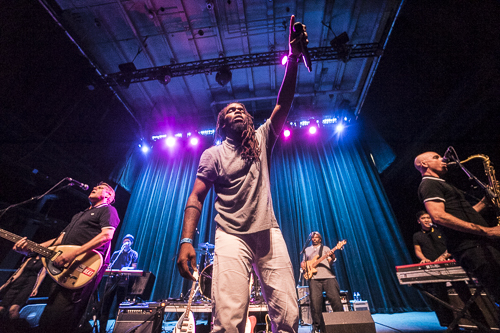 Live Review: The English Beat and Ghost Town Steppas at The Masquerade in Atlanta

Photos by Shaun Krisher. Full gallery at the bottom of the review.

The evening of Sunday July 29th, Atlanta natives gathered at Masquerade for an evening of music to wrap up a good month of Braves games, fireworks, and general summer fun. The Purgatory stage held a showcase of bands more for the younger crowd, while Heaven hosted the show to see, the Here We Go Love Tour featuring The English Beat with their touring guest Ghost Town Steppas.

Now, The English Beat is a band of note. Starting in 1978, yes 40 years ago, “The Beat” (as they are called by their fans), is credited for originally bringing ska music to the Americas. Although not comprised of all original members, the talent behind the current rendition of the band does the original band justice and then some.

The crowd that came to support this legendary band was heavy on the older side with a smattering of the type of younger attendees that recognize real talent when it comes through Atlanta.

Right when the doors opened, which was an hour before the opening act, fans crowded the front of the stage to hold their spot for the night. I was taken aback by this considering the age of most of the patrons. You could tell that The Beat’s true Atlanta fans turned out in numbers to get their dose of music that has been conquering the airwaves for nearly two generations, giving inspiration to new musicians who have also left their mark on the world, such as The Bastard Suns and Atlanta’s own AndLove. As this was the second time I have had the privilege to see these guys live, I personally couldn’t wait to see what The English Beat had in store for their show and who they were taking with them on their current tour. The Ghost Town Steppas perform at The Masquerade in Atlanta, Georgia.

Opening up the night and breaking the silence in Heaven were the Ghost Town Steppas. Hailing from New Orleans originally but based out of California, these guys put a jazzy twist on the classic sound of ska music. Before their show, I had never given these guys a listen, which I now regret entirely. Although they are a newer band, these musicians really hold down their performance with some true talent. Comprised of a classic three piece band with the guitarists doubling on vocals, Ghost Town Steppas embodied the true essence of ska music by cutting loose and having fun. Their lead guitarist/vocalist has some nice chops and put out some crisp vocal triplets that added some good depth to the band’s overall performance. And said guitarist/vocalist has some nice guitar melodies as well that were held together by the cohesive beat held together by their drummer and bassist. The Ghost Town Steppas are definitely worth giving a listen to as these guys keep pushing their evolved take on modern ska music.

I had the privilege of getting backstage before these guys went on, I got a true glimpse at how these veterans of ska get psyched for a show. Saxophone scales echoed throughout the back halls of Heaven. Faint bass beats could be heard coming from a side room. The English Beat’s main toaster King Schascha was loosening up, strolling up and down the hallway backstage. Then, the one and only Dave Wakeling came in from the tour bus surrounded by a shroud of what I can only describe as pure “rock-star-ness”. The English Beat perform at The Masquerade in Atlanta, Georgia on July 29, 2019

As one of the founding members of The English Beat, Dave is, by all definitions of the word, a true rock-star. The man helped start a musical movement in the United States and has kept that legacy going for a strong 40 years. When Dave hit the green room, all of the other members followed suit as their start time was only mere minutes away.

As each member of The English Beat took to the stage, the crowd whooped and hollered to release the anticipation they had been holding all night. All of the faces I could see in the crowd had smiles from ear to ear as the band jumped right into their performance, starting off with their classic tune “Rough Rider”. The Beat were energized from note one of their set, with their contagious energy permeating through the venue of Masquerade, even to the bartenders and merchandise sellers in the back of the venue. The trade offs between each musician was magical, especially the back-and-forths between Dave Wakeling on guitar and Matt Morrish on saxophone. Matt Morrish from The English Beat

Matt really shined on saxophone with his solos, giving chills to the spine with how crisp each one was. This is one of the multitude of reasons I love seeing The Beat play live, with some other reasons being Dave killing it as a performer on stage, King Schascha’s dancing on stage, and the one and only Ed Nucci killing it on his drum kit. And when I say killing it, I mean forward his mail to the pocket.

The band kept on their show with more classics that brought back memories for all their seasoned fans, including “Too Nice To Talk To”, “Click Click”, and “Can’t Get Used To Losing You”. Each of their classic tunes still has the same appeal that brought The Beat fame back when they were just starting off as a band. Mixed in their set were some more recent song additions, such as “Rude Boy Skanking” as wonderfully sung by King Schascha as well as “Never Die” and “How Can You Just Stand There”, both tracks from The Beat’s new 2018 album Here We Go Love. As a side-note, Here We Go Love is The Beat’s first album after a 36 year hiatus from recording.

Overall, Ghost Town Steppas and The English Beat showed why ska has been a staple in the musical world. You can catch both these great acts on The English Beat’s Here We Go Love Tour as they wander across America. You can also check out The Beat’s latest album, Here We Go Love, here. Don’t miss out on seeing this legendary band continue their legacy of putting joy into the hearts of music lovers around the world.