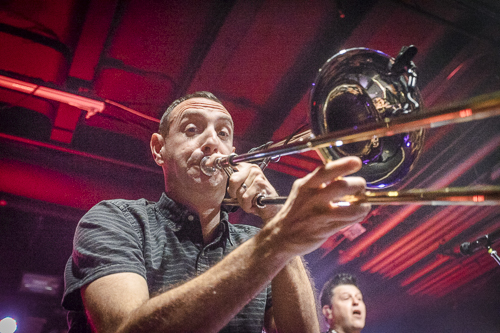 Live Review: Less Than Jake and Guests Pack Out the New Masquerade

Review by Daniel Karasek. Photos (at the end of the article) by Shaun Krisher

The night of February 24 was graced with the presence of The Attack, Bunny Gang, Pepper, and Less Than Jake at the Masquerade. This was my first show at the new Masquerade location. To be honest, it was my first adult adventure to Underground Atlanta as I haven’t been there since I was a kid over 10 years ago. On first impressions, the new location seems to be a great fit as the vibe of modern Underground Atlanta really blends well with the classic rock culture embedded in Masquerade. The stages are now split between three different rooms in the alley at Underground, much different from the traditional vertical stack where the stages got their name sake. I thought it would be jarring to not have the traditional Masquerade layout, but I was wrong. The open layout makes for a large yet cozy venue.

Now to discuss the show. To start the evening, Florida-based band The Attack rocked the stage with their unique sound that is true to the roots of punk rock. They really make their shows about their sound and not about their looks, which were also on point. The fast riffs of Brad Palkevich really got the crowd hyped while Tito Esquiaqui and Mikey Cortes held down the beat with their respective drums and bass. And we can’t forget the mad vocals of Charlie Bender blasting the world to get on his hype level. This band is a true punk band that any rocker can jam to.

Next on the set list for the night was The Bunny Gang, a rag tag group of dudes who jam out like no tomorrow. This was The Bunny Gang’s cherry pop for playing at Atlanta’s iconic Masquerade. Their self-proclaimed “Revolution Rocksteady” sound is truly a band not to miss when in town. It combines punk rock with reggae in a ska concoction that is smooth on the ears. Nathen Maxwell, the lead singer for The Bunny Gang, showed off his crisp chops as he rocked the stage. He has that rockstar persona with infectious energy that spreads like wildfire in a crowd. Backing him up were the killer keys of Levi Garrett and the hot horns of trombonist Keith Larsen as well as the rest of the motley crew. On asking for comment about the new Masquerade, Levi said “the venue had good sound” and Keith said “the venue was cool with the atmosphere”.

In the slot before the headliner was San Diego’s own Pepper, a feisty ska group very reminiscent of Sublime in their groovy sound. The band’s origin of Hawaii is obvious in their showmanship as they bring a little bit of the island culture to their show. The crowd lit up with noise as Pepper took the stage, and by the second song the walls of the Masquerade were even vibing to the music. The deep, gritty vocals of Kaleo Wassman really stood out to make the music shine. The vocals matched with the slick bass licks of Bret Bollinger and catchy beats of Yesod Williams made for one popping performance. When Kaleo and Bret broke into an acoustic duet of “Point And Shoot” the entirety of Masquerade joined in making for one hell of a singalong, in Heaven none the less. The band definitely lived up to the reputation built around their 20 year career.

As the headliner for the evening, Florida’s own Less Than Jake killed it. There was insane hype from the crowd from the moment they took the stage. To start the show, as Less Than Jake are known for their stage antics, confetti canons blasted the audience alongside the first notes that brought the audience into a roar of excitement. From note one, Less Than Jake showed why they have been kings of ska for nearly 25 years. Their second song ushered in a storm of crowd surfers that continued throughout the show. As the band continued into their set, the lead vocalist and guitarist Chris DeMakes remarked that he “never saw a better crowd” at Masquerade. The energy Chris and bassist Roger Lima put into each song was tenfold reflected by the crowd that night. They both definitely put the show in showmanship. Drummer Vinnie Fiorello kept the tunes in line with his highly danceable and contagious beats. Goldfinger and JR on trombone and tenor sax respectively added the pizzazz to the show that only horns can bring to the table, especially horns in such talented hands. The show these guys put on, riddled with the craziness and mischief necessary for a ska show, is a sight to behold. After a solid encore, Less Than Jake brought the night of great music to a close with more energy than they started their set with.

This great night of ska and rock had the Masquerade packed out. I’d recommend catching a show at the new Masquerade location, especially if any of these acts roll through again.