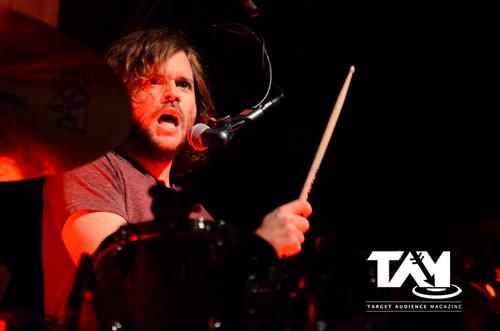 Alternative rockers KONGOS returned to Atlanta on Feb. 5 as part of the Lunatic 2015 Tour, the band’s first headlining tour in the U.S.

Fans of the four brothers out of South Africa packed Center Stage as the band opened with “Hey I Don’t Know,” an upbeat and drum-heavy track from the debut album Lunatic. “Sex on the Radio,” “Escape,” and “It’s a Good Life” kept the crowd on their feet and dancing before the band decided to slow things down a bit.

“This is our first headlining tour, so we can do the slower songs we don’t normally do,” said vocalist/drummer Jesse Kongos as the lights went down and a spotlight fell on vocalist Dylan Kongos, who performed a gorgeous solo acoustic version of “Travelin’ On.”

The opening accordion notes of mega-hit “Come With Me Now” was met with roaring applause relatively early in the set, with the crowd singing back every word. New song “I Don’t Mind” was a highlight, as well as a cover of The Beatles’ “Eleanor Rigby,” which featured an unconventional rap verse and the crowd was loving it.

“This is our sixth night of this tour and you are the loudest people yet,” said Jesse Kongos with a smile, which only spurred the crowd on more as the opening drums of “I’m Only Joking” filled the venue and rings of smoke shot from the stage into the crowd in time to the beat. Arguably the best performance of the night, the song had everyone on their feet rocking out and the brothers certainly seemed to enjoy themselves more during the last song of the set.

An encore was demanded almost immediately and the band came back out to perform two covers; the first being “Tokoloshe Man,” a song originally done by their father John Kongos in the 70s. New Order’s “Blue Monday” was something of a surprise, but KONGOS made it their own with a strange but interesting mix of new wave and kwaito sounds to end the night.