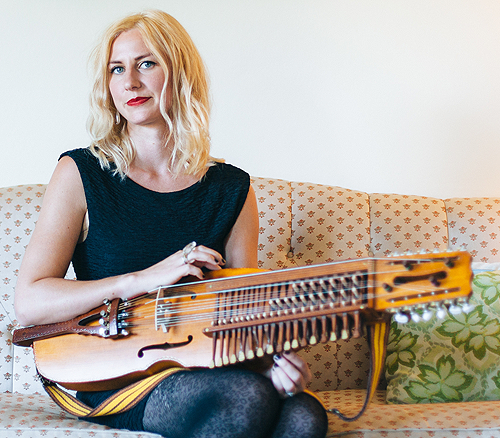 Annalisa Tornfelt is the lead singer and fiddle player for Black Prairie, an acoustic band out of Portland, Ore. Black Prairie was originally an instrumental band, but as time has gone by Annalisa’s vocals have become an integral part of the band’s sound. While Black Prairie is on hiatus (most of the band members are also in The Decemberists), Annalisa is preparing to release her own solo album.

The new album, entitled The Number 8, is currently available for preorder on Pledgemusic. It was recorded in eight hours in August, on an eight track at Mike Coykendall’s house in Portland. Each song on The Number 8 consists of guitar and vocals with one song featuring her playing the nyckelharpa (seen in the photo above).

After Black Prairie performed at Eddie’s Attic in Atlanta in September 2014, Annalisa took some time to talk with TAM about The Number 8, her musical roots and the unique instruments she plays.

So, how did you get involved with the violin?

I started playing violin because my mom was a Suzuki violin teacher. Shinichi Suzuki was a violinist in the 60s that really transformed teaching in America, because he believed that every child that spoke a language could also play music. My mom was super-passionate and into this form of teaching, so she went over to Japan with her younger sister and took her to study with Dr. Suzuki. I don’t even remember studying violin. I just always played. She also taught violin when I was growing up, so all of my friends also played violin. So, that’s how I got started.

How about the other members of your family? Are there other musicians among them?

My dad was a cellist and a composer, and taught orchestra. They ended up having five kids and I am the oldest. Four sisters and one brother, and we all play musical instruments, which was really how we had family time… playing music around the house together. I loved the joy that I got from being able to play with my family. My first band was a string quartet with my dad on cello, my mom on viola, my sister on second violin and I played first. I was probably 14 when we started playing weddings and Christmas parties. I got to see the insides of people’s houses in these grand Christmas parties in Anchorage, Alaska, and I really enjoyed that.

When did you begin playing with people outside of your family?

When I was 16, I was invited to be a counselor in Cordova, Alaska, a little fishing town that you can only get to by ferry, boat or plane flying into it. It is the most gorgeous, beautiful town on the edge of a mountain, right next to the ocean. That camp really changed my life because I experienced folk music, square dancing, jamming around the campfire, people staying up all night and playing and singing music nonstop.

So, at that kid’s camp, I made some really good friends with the some of the other counselors. We put together a band and started traveling with the band and sharing what the camp could do for kids to inspire them to play music and be positive community members and what camps can do to enrich the community over all ages. We went to Louisville, Ky., for the International Bluegrass Music Association (IBMA) and played for the awards ceremony there, which was really exciting. After that, my world just opened up and I just wanted to be a professional musician.

Can you talk a bit about the musical community in Portland, Oregon?

Portland has such a non-competitive, open-arms attitude. I moved from Anchorage to Portland, so I didn’t really have any other hometowns to compare it to, but Anchorage is the same way. If you play music, automatically you are plugged into the community. Everyone is excited to include you because you’re able to play.

Yeah, Portland… as soon as you walk in the door, you’re greeted with open arms. It’s a very supportive community and everyone is so collaborative because of it. With Black Prairie we did Singers: Vol 1 with James Mercer (The Shins) and Sallie Ford, which was an example of some of the collaborations and close music community that we have here. It’s really special.

Tell me how you discovered the Stroh Violin, which is featured a lot on the Black Prairie albums. It’s a very unique sounding and beautiful instrument with a lot of character.

The Stroh Violin is the proper name for it, but I like to call it the “Phono Fiddle.” It’s got a resonator from a phonograph and that’s exactly what it sounds like to me. It feels like I am listening to an old record from a forgotten age. It makes me play differently as well. It’s a great secret weapon.

I saw a picture of Amanda Lawrence, a violinist and violist that lives in Portland, playing one and I could just imagine the sound in my mind. I freaked out about it. My brother plays with Sallie Ford and the Sound Outside and Sallie Ford was making an album at the time. She’s got kind of a big, loud voice and I really wanted to find a way to get on that record… bad.

I told my Black Prairie band mate, Chris Funk, while we were recording Feast of the Hunter’s Moon that I really wanted to play it on Sallie’s record. So, while we’re recording I hear Funk call out from the recording booth “Annalisa, I found the fiddle you’re supposed to get. It has a snake head for the scroll!” So, I never had even played one before and then Chris Funk happens to find the coolest one on eBay just minutes after I suggested that I wanted one.

It arrived in a vacuum cleaner box from Romania. There was just this crumpled up old newspaper tossed in this vacuum cleaner box and the instrument was pretty much in pieces when I brought it to my violin luthier. He told me that it was indeed the resonator from a phonograph, did some research on it and found that in Romania they’re still throwing away phonographs in their junk. The trumpet horn had been all crumpled up at one point in the horn’s life and had been rebuilt. He did a wonderful job fixing it up for me. It has nails for the snake head’s eyes, which I really like.

How about the nyckelharpa? It looks very complicated.

It is a traditional Scandinavian instrument. It’s out of this world and I’m completely in love with it. I saw a Swedish band play at the Wintergrass Festival in Washington called Vasen and the band plays the violin, nyckelharpa and guitar.

Black Prairie was recording A Tear in the Eye is a Wound in the Heart at the time and again the story goes that I tell Funk what I see and he tells me that he knows that Peter Buck from REM has a nyckelharpa.  Funk calls Peter, but he is off in another country. Now, this is a great example of the Portland music community: Peter then calls his friend, Scott McCoy, who is recording right near us and asks him to bring over Peter’s nyckelharpa.

I went home immediately to figure out exactly how to hold it. So, I looked at YouTube and all of the sudden I’m watching videos on how to tune your nyckelharpa and that in itself is quite a feat. There are eleven sympathetic strings underneath the four strings on top that you play. When you play it, you feel like you’re transported. It has a natural reverb because of the sympathetic strings underneath. So you feel like you’re in a great hall or on an iceberg or an ice cave.

How did The Number 8 come about?

Black Prairie had just finished recording the album Fortune and I had a handful of songs that didn’t get on the record and were just kind of floating around. I had been playing through them on my own and I also was asked to do a solo show, so I did that. It was fun to perform by myself with the guitar, which was something that I hadn’t done in almost 10 years. So, I went over to Mike’s house with 15 tunes ready to go and we played through each of them twice. He set up his eight-track and four microphones in the living room; two on vocal and two on guitar.

We also mixed it there, upstairs in his attic. It was incredible to watch him work. Each song sounds really interesting and it is the way it is. I just recorded two takes of each song, so they’re as real as it gets. We picked the best out of the two recordings of each song. It sort of was a surprise to me that it’s all finished. It just took one day and now everything else is coming along.

How would you describe the music on The Number 8?

I’d say the new album is folk music. It’s got a little country to it. I play in a band called Calico Rose, which is a three-part harmony country “girl band.” I wrote a lot of songs envisioning Calico Rose playing them, so I have some songs on there that have a Kitty Wells flair to them. Some of them sound a little Rickie Lee Jones or Joni Mitchell.

There is this girl, Laura Marling, that has been quite an inspiration to me this year. I actually found her on NPR’s “Tiny Desk Concert.” The video was just her and her guitar… that’s it. It was so refreshing to see. I bought her CD and listened to it. It’s really stripped down, with hardly any other instruments on it… just her and her guitar. So that really inspired me to do an “Annalisa” record, just me and the guitar.

What is next? After the album is released?

I am looking forward to just doing some Annalisa shows. It’s been a nice way to expand a little bit.

The Number 8 is available for pre-order at Pledgemusic.