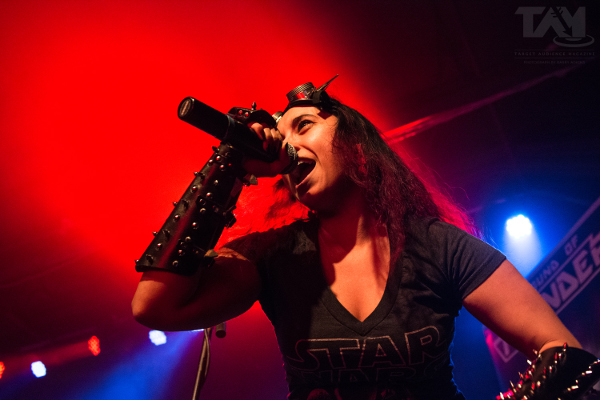 Last Thursday night was quite an evening!  Udo Dirkschneider, former lead singer for metal band, Accept, made a stop at the Baltimore Soundstage with his solo band for a lengthy set featuring old Accept tunes and a good time.  I had my own reasons for going to the show, however, which revolved around seeing one of my favorite bands, A Sound Of Thunder, open up for Udo.  They did me a true kindness by obtaining a photo pass for me, which allowed me the pleasure of getting up-close and personal during their first three songs.  While this photo pass allowed me to capture some shots of their set, as well as fellow opener, MindMaze, my clearance didn’t extend to Dirkschneider’s set.  Unfortunate, but better than if I hadn’t been able to snap shots at all!  Plus, I had the added enjoyment of discussing classic metal with a fellow enthusiast, ranging from Iron Maiden to Death.  Discussing the finer points of Metallica’s back catalog was a rare treat.

Now, onto the photos!

It’s difficult for me to say exactly how awesome MindMaze’s set was.  Based on what their vocalist, Sarah Teets, recently said on her Facebook page, this may have been their best set yet.  However, as someone who has never listened to MindMaze prior to that night, I can only say this: the combination of searing vocals, pounding drums, and rapid fire riffs made their set a joy to behold.  The abundant audience that filled Soundstage might have seemed a bit stiff at the beginning, but quickly erupted in applause at the end of their opening song.  Even the debut of two new songs came across to resounding cheers.  I, for one, have already gone to check out more of their music.  In short: it’s worthy of your time.

A Sound Of Thunder has been a personal favorite of mind since I first encountered them opening for Fozzy at the Jaxx Club in Springfield, VA.  At that point, they gave off an air of Black Sabbath mixed with Iron Maiden and Judas Priest.  However, over the years they’ve developed their sound and melded all their influences into a seamless exhibition of heavy metal.  Though they didn’t have much more than half an hour, they still managed to wreak havoc upon Thursday’s crowd.  I would be surprised if there were any in attendance who were not newly converted fans after their first track, “Queen Of Hell,” rang in their ears.  Certainly, by the time they reached their cover of Manowar’s “Pleasure Slave,” a slew of onlookers were inducted into the Legion Of Thunder, submitting to the will of front-woman, Nina Osegueda.  For those who are looking for some of their influences, I’d highly recommend their newest release, “Who Do You Think We Are?”, a collection of cover songs.  If you’d like to check out their newest original work, however, look towards their album, “Tales From The Deadside,” which pairs nicely with the Valiant Darkman comics.

Here are some photos from Thursday, or check out the interview I did with Nina and Josh about “Tales From The Deadside.”