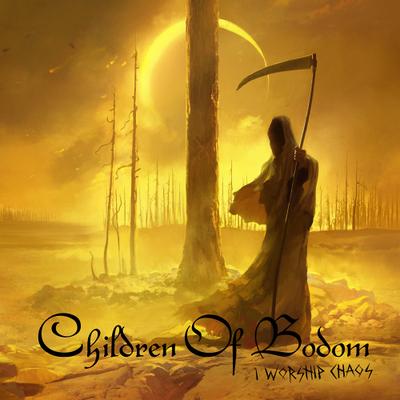 CD Review: ‘I Worship Chaos’ by Children of Bodom

Children of Bodom are a four-piece for the first time in its 20-plus year career. Roope Latvala left the band this past May before the recording of I Worship Chaos. Well, the absence of a second guitarist has not hindered the band’s aggression. “I Hurt” kicks the album off in hard hitting fashion. The stomping guitar riffs and pulsating drums drive this track and remove any doubts that the band is “soft” now. “My Bodom (I Am The Only One)” combines elements of thrash and 80s sleaze rock. The band seamlessly shifts from Motley Crue to Slayer and back without a hint of awkwardness. Keyboardist, Janne Wirman, stands out on this track with some nice leads, while Laiho throws out a sick solo. The Gothic inspired “Morrigan” is atmospheric with a strong mid-tempo beat. Again Laiho’s masterful guitar work keeps the song interesting and unpredictable. There is a dreamlike feeling on this track with the eerie keyboard and frigid guitar passages. “Prayer for the Afflicted” is a somber dirge with weeping guitar and depressed keys. Fans of the band’s faster material will find solace in “Horns” and the complex “Suicide Bomber.”

I Worship Chaos successfully melds Bodom’s influences for easy consumption. The band’s death metal, thrash, classical, gothic and sleaze metal roots are out for the world to see. Alex Laiho and the guys do not force it, thus the album is never contrived. Bodom’s greatest strength is its ability to balance recklessness with musical dexterity. The band knows when to swing for the fences and when to relent. Production wise the album is top notch. Mikko Karmilla mixed and co-produced the band’s previous record Halo of Blood, and does a great job on this one. The recording process must have gone smoothly because Bodom have never sounded better.

I Worship Chaos should win over Bodom fans not fond of the band’s past few releases. The record has a good number of thrashers to tide them over, and a few cuts that could garner airplay. Here is hoping the band continues to worship chaos with reckless devotion.

Check out the band’s website for news and tour dates: http://cobhc.com/site/