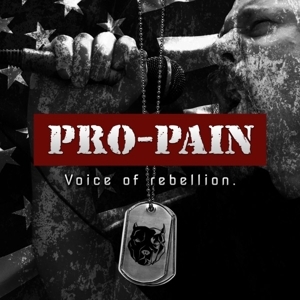 Pro-Pain’s newest release, The Voice of Rebellion, is the band’s 15th release in its 24 year history. The title track is a hard-edged slab of hardcore aggression. The track’s chunky groove is signature Pro-Pain while guitarist Adam Phillips throws out a nice lead to keep things interesting. Frontman Gary Meskill sends out a stern warning on “No Fly Zone” to anyone that steps to him. The ambulance sample and uplifting lyrics compliment the rigidity of the music. The battering “Righteous Annihilation” is a frenzied riff-fest with manic drumming giving a feeling of speeding down a crowded hill. The band shows its hardcore roots on “Take it to the Grave,” which is a straight does of fast-paced hardcore punk. “Age of Disgust” is a three minute breakdown with crushing double bass and a constricted rhythm that explodes in the middle. There is also the venomous “Blade of the Cursed” with its sweeping guitar riffs and unorthodox song structure.

The songwriting on Voice of Rebellion surpasses the band’s previous release, The Final Revolution. The songs are not conventional hardcore, with chugging riffs and the expected breakdowns. While breakdowns and chugging riffs are present, the songs twist and turn with solos and complex drumming. Pro-Pain is often overlooked and generalized for releasing the same record, but it is untrue and unfortunate. Voice of Rebellion is an amalgam of punk, hardcore and thrash with superb musicianship.

The production on Voice of Rebellion is thick thanks to Corey Williams and Gary Meskill himself. There is no clipping on this record nor do the instruments drown out the other. Meskill’s vitriolic vocals are mixed fine while the leads are properly laid over rhythm guitar and bass. The record reminded me of Terry Date’s work with Pantera and Prong in the 90s.

Voice of Rebellion is a solid Pro-Pain album. The songs are great and rarely monotonous with several tracks that standout. Fans of the band and those unfamiliar with this group should buy the album. The rebellion cannot be quelled.