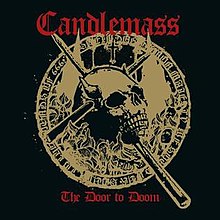 CD review: “The Door To Doom” by Candlemass

The doom metal luminaries in Candlemass return with the band’s newest release in seven years, The Door To Doom.

The gargantuan riffs on “Splendor Majestic Demon” leave no doubt that the listener is in store for a heavy experience. Original vocalist Johan Langquist makes his triumphant return after a 33 year absence. His soaring vocals have not faltered and carry the same demonic majesty as they did on the band’s 1986 debut Epicus Doomicus Metallicus. “Splendor” features a crushing galloping riff that explodes during the track’s chorus.

“Under The Ocean” commences with a dreary, psychedelic riff before it is interrupted with a colossal riff and ground shaking drums. Drummer Jan Lindh keeps a stomping mid-tempo for the duration of the track. The following track “Astorolus-The Great Octopus” delves deeper in to the seas of doom as none other than heavy metal progenitor Tony Iommi guest stars on this track. This slow, haunting monody imbues a sense of hopelessness as Langquist laments of a great sea monster that will swallow the earth. Iommi’s bluesy solo serves as fitting music as the planet is devoured.

“Death’s Wheel” is notable for its circular, galloping riff like a carriage traveling to hell. Guitarists Lars Johansson and Mats Bjorkman’s riffs drip with sludge and the double drumming during the song’s chorus heighten the song’s heaviness. “House of Doom” is another highlight with its ripping guitar riff and spine tingling organ during the song’s midsection. Candlemass conclude Door with “The Omega Circle”, the longest track on the record, clocking in at over seven minutes. The trudging tempo and mammoth riffs transition to a soft acoustic passage as Langquist sings of a satanic dream before things turn heavy again. A mighty end to a mighty record.

The Door To Doom is not a door, but a lofty gate that once opened strikes the listener with crushing riffs and operatic vocals. The members of Candlemass do not rest on their laurels and prove why the band is so revered. Bassist and key songwriter Leif Edling creates the perfect balance between heavy and soft as the band never over does it. The record’s softer moments are not just rest areas for listeners but good pieces of music. Of course, when the band plays heavy, the earth shakes and the demons listen. Door is forty-eight minutes of doom metal played extremely well. While the lyrics are awkward at times, they barely detract from the quality of this record.

Candlemass has not lost its step since its formation 35 years ago. The Door To Doom is a stellar record that should please fans and those new to the band. Open the door and revere the colossal splendor before you.