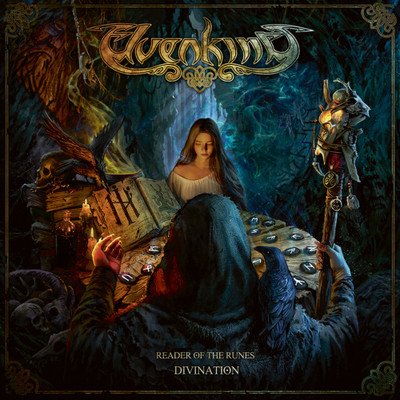 CD Review: “Reader Of The Runes-Divination” by Elvenking

Elvenking unleash a potent spell of folk metal on its tenth release, Reader Of The Runes-Divination. “Perthro” is a brief piece that opens the album. “Perthro” is the rune of fate and the unknowable. The tribal drums, sorrowful violins and droning vocals convey a sense of mystery and adventure. “Heathen Divine” is an exuberant track with crushing riffs and driving percussion. Guitarists Aydan and Rafahel lay out some great harmonies and solos throughout this track. “Divination” continues the lively tone of this record with a fast tempo and sweeping violins. This is an anthemic track with its hardy chorus and Rafahel’s energetic vocals. The smooth transition in to a tight groove makes this a enjoyable track from start to finish. “The Misfortune Of Virtue” is one of the heaviest tracks on Reader with its melodic death metal riffs and pounding Lancs’ pulverizing drums. Still, there are tranquil moments during the song’s chorus with its lush keyboards and saccharine vocals. The song seamlessly transitions from heavy to soft while maintaining its dark character. “Under The Sign Of The Black Star” is a grandiose track with its baroque guitar riffs and lumbering bass. The music paints a picture of a group on horseback traveling the countryside at night on a quest. “Reader Of The Runes-Book 1” is a near 11 minute epic that concludes the album in splendid fashion. The regal riffs and Aydan’s soaring vocals are underscored by a mid tempo that slows down for the melodramatic chorus. Blastbeats and black metal riffing kickoff the second half of the track before an acoustic guitar relaxes the intense atmosphere. An excellent end to this record that leaves the listener wanting to hear “Book 2.”

Reader Of The Runes is epic, symphonic metal that takes the listener on a journey. Elvenking play lively and passionately throughout the album, throwing out numerous surprises. Each track is lush and textured with several things going on at once but never sounding awkward or pretentious. This is attributed to the brevity of the songs and the album’s overall song order. Production wise, Reader is stellar, with clear quality and excellent guitar and drum tones.

Elvenking cast the right spell with its tenth record. Reader Of The Runes-Divination is a fun, heavy, adventurous record of the highest degree. Fans of symphonic, folk or power metal will certainly enjoy this record with its great musicianship and songwriting. Bravo Elvenking.