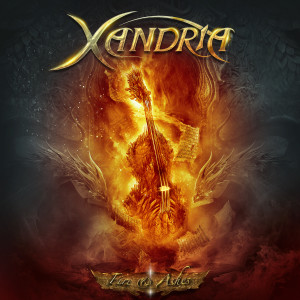 Hot off the release of its 2014 release Sacrficium, Dutch symphonic metal outfit Xandria’s new EP, Fire & Ashes, is a mix of old and new. The mini-album features 3 new songs, two covers, and two re-recordings of older songs. Vocalist Dianne van Giersbergen is the focal point of this album. Her operatic vocals effortlessly soar above the classical riffs and pounding drums. This is evident on the opening track “Voyage of the Fallen.” The baroque inspired track is both dynamic and epic. Dianne’s soothing vocals contrast against the aggressive music making for an interesting listen. The band shows its diverse influences on “Unembraced” as it blends techno, classical piano and metal. The band pulls it off well and it does not sound odd or disjointed. This is attributed to the band’s simplified approach to the songs. Power and symphonic metal is often criticized for being pretentious and over the top. The criticism is often justified, which is why it is refreshing that Xandria does not tread the same path. The downbeat ballad “In Rememrance” stands out for its laid back drum beat, dissonant piano keys and somber guitar lead. The track is bound to become a fan favorite and will be frequently played at concerts. The re-recorded track “Ravenheart” does not deviate much from the original recordings and essentially shows the range of Dianne. However, the updated version of “Now and Forever” is heavier and bombastic than the original which may impress or disappoint fans.

The production of Fire & Ashes is strong and shows off the vocal power of the van Giersbergen. The vocals do not drown out the instruments, as the band’s heavy, powerful sound is not diminished. The pianos, strings, and electronic samples are very audible, allowing the listener to hear the nuances of each track.

In short Fire & Ashes is a good stop gap EP that should tide over fans until the next proper release. It is also a great introduction for those unfamiliar with the band. Fans deadset on owning everything Xandria should pick this up. However, casual listeners should still give the release a listen.

Learn more about the band at http://xandria.de/.