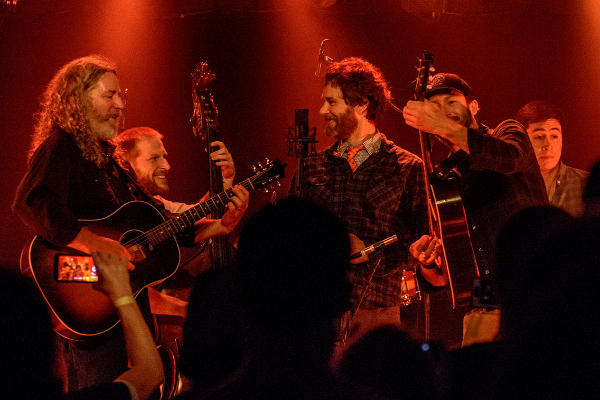 My wife and I rarely miss a Carbon Leaf show that comes our way.  In fact, I could find you at least four previous concert reviews I’ve done for their shows, but I’ll settle for one.  Needless to say, they’re an awesome act, full of warm personalities and funny moments.  But I’ve never had the pleasure to try my hand at giving them the full-on concert photography treatment, so it seemed like a no-brainer when I heard they were playing down the street from me at Baltimore Soundstage.  Here’s my review and picture gallery of that evening, April 15, which saw the band joined by a new trio, Me And My Brother.

“Grammatically incorrect and not actually related” states the little black and white info card I picked up from Me And My Brother’s merch stand.  And so it is, three solo artists [Carl Anderson / Schuyler Fisk / Sam Wilson] who happened to be touring alongside one another last Fall found themselves pulled together by an overwhelming bond.  It’s quite impressive that they’ve written a good deal of songs together in the short time since.  The modest group stood before us and laid out largely acoustic, folksy tunes (with a little electric inflection courtesy of Wilson), even joined by Carbon Leaf’s resident mandolin player, Carter Gravatt, and drummer Kurt Leon for two separate songs.  As of yet, the group hasn’t released an album of their unified efforts, but I purchased Carl Anderson’s solo album, Risk Of Loss, which possessed an air that reminded me vaguely of  Warren Zevon (though dialed back on the L.A. cynicism).  While the trio was laid back and reminded me of sitting on the porch with family on a warm Summer’s evening, songs like “Champagne and Reefer” gave me cause to pause and chuckle.

Carter Gravatt of Carbon Leaf joining in on Mandolin.

It’s been a long time since I’ve been to a Carbon Leaf show in which I wasn’t seated at a table enjoying dinner and a nice drink.  While those holiday shows are always special and dear to me, the energy displayed last Saturday gave way to an entirely different atmosphere.  One difference was a disco ball which ricocheted rays across the crowd and band in a stunning display of dancing starlight.  Every song could have been confused for a sing-along, as the audience knew these tunes by heart.  Old favorites like “What About Everything?” and “One Prairie Outpost” from Indian Summer are obvious, but even the intimate one-mic rendition of “Two Aging Truckers,” from the more recent Constellation Prize, received the audience’s choral treatment.  And the laughter of the band was infectious and spread throughout the night, such as the moment when vocalist Barry Privett disappeared for a few seconds and guitarist Terry Clark sneakily entered the center-stage spotlight for his newfound role as lead singer.  Privett returned the favor, as you can see below, by rocking out with some very sweet air guitar.

As the band left the stage at the end of the night, chants of “One more song!” emerged from the crowd.  Not long afterwards, Privett returned once more, jumping off the front of the stage and planting himself alongside the concert-goers, joining in their chant.  He quickly became unhappy with the lack of the band’s response, and began booing the others.  The crowd erupted in laughter, and a smile slipped across his face, climbing back onto stage for the closing track, “Let Your Troubles Roll By.”  After the show, the band made their way to the merch table, talking and signing things for fans until it was closing time.  I can only imagine how many conversations they accumulated amongst themselves before the night was over.  But every fan who stuck around was a happy camper, and I assure you, you will be too if you have the chance to catch this fine group of men in concert.