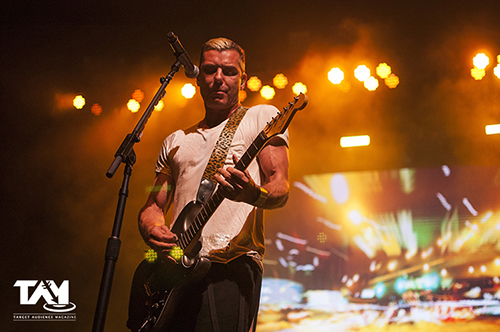 Bush returned to Atlanta May 10 at the new Coca-Cola Roxy in support of new album Black and White Rainbows, the band’s seventh album. A child of the mid-’90s grunge scene, Bush dominated ’90s rock radio with songs like “Everything Zen” and “Comedown,” and continued to release a steady stream of hits before deciding to break up in 2002. After a long hiatus, the band returned in 2010 with a new line-up and fresh music, and hasn’t slowed down since, releasing three albums and touring worldwide.

Massive hit “Everything Zen” started off the night at the Roxy, and the set spanned the band’s impressive catalog of its 23 year career, including “Greedy Fly” and “Swallowed” from the 1996 album Razorblade Suitcase; The Chemicals Between Us” from 1999’s The Science of Things; and of course, the songs that put Bush on the map, “Machinehead,” “Comedown,” “Little Things, and “Glycerine,” from the 1994 debut album Sixteen Stone. Lead single from Black and White Rainbows “Mad Love” showcased a mellower side of Bush, while “Peace-S,” also from the new album, proved the band has lost none of its grunge roots.

Gavin Rossdale is always a lot of fun to watch on stage, energetic and in love with the crowd through every song. He is a performer who gives his all to his audience, making a point to sing not only to the people on the floor, but those in the higher seats as well throughout the show. During “Little Things,” he surprised everyone by leaving the stage and roaming through the crowd, climbing the stairs to rock out with some lucky fans on the top floor of the venue, and giving everyone in the Roxy an unforgettable night.

The Chemicals Between Us

The Sound of Winter

Beat of Your Heart

The People That We Love

The One I Love