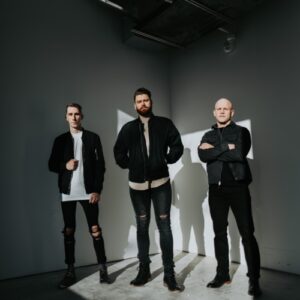 Thematically, “Reset Restart” is a song for anyone who has been through hardships and needs to reset themselves and restart who they are as a person. “It’s about making peace with your darkest thoughts and realizing the life you had made was not all that you made it out to be,” says Nauth. “Realizing what the things you’ve done to yourself have truly done to you is a really hard thing for people, myself included, and this is a serious self-reflection song for me in particular. I have had a lot of things in life where I thought I had it all figured out, and thought I was happy, only to realize it was all built on lies and nothing real. I realized I wasn’t even someone I wanted to be in a place I didn’t want to be anymore and had to completely start my life as I knew it.”

For Sakoya, “Reset Restart” is all about discovering who they are as a band. The band had a few unsuccessfully sessions with writers and producers and was eager to rediscover themselves. “We were trying to work with as many producers and writers as possible and were super excited to go to Nashville and work with Andrew Baylis,” explains the band. “We knew going into it we only had one day to write and record a song with him and “Reset, Restart” is what we came out with. We loved his influence on the song a ton and felt he really captured what we were trying to do and say.”

Produced by Andrew Baylis (Sleep with Sirens) and mixed and mastered by Jeff Dune (Veil of Maya, Born of Osiris), “Reset Restart” is now available across all major streaming platforms. Listen to “Reset, Restart” on Spotify or watch the video on YouTube below.

Busting out of Indiana in the heartland of America comes Sakoya, an outfit ready to take the scene by storm. This American hard rock band sports a polished, refreshing sound bound to get stuck in heads. Vocalist Alex Nauth fronts Sakoya with the backbeat of Josh Randolph and Mike Dobbs both of which are military veterans. Sakoya provides elements of 2000’s rock/metal with a modern spin, giving a potent, aggressive delivery with meaning behind the tunes. With captivating choruses and memorable melodies, Sakoya’s anthemic brand is quickly on the rise.

Sakoya burst onto the scene in 2020 with their debut single “Lost and Reckless”, which immediately started to turn heads. Within the year, “Lost and Reckless” amassed 250,000 streams on Spotify thanks to ripe replayability and a strong message within the lyricism. February came with the infectious second single “Wasted Soul”, and April brought about the “Fallout”. The band kept busy and presented “Scarred” in November, earning a spot on the acclaimed Spotify playlist “Got Djent?”

Sakoya’s latest single “Am I Blind” reached over 10,000 FM radio spins topping out at #6 on The Foundations charts and #22 on the Billboard (BDS)  Mainstream Rock Indicator chart. With the triumphant return of live shows in 2021, Sakoya has been plugging away and grinding to emerge bigger and better than before. The group has a wealth of new music that they’re fervently waiting to unleash in the near future.

Music videos, tours, and much more are primed and soon to be announced for the band. Add Sakoya to your radar on their road to surefire stardom.